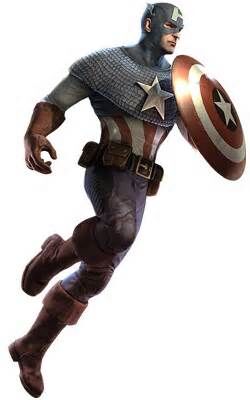 Steven Rogers was repeatedly turned down by the US military when World War II broke out because he was too small and weak, so he signed up for Operation: Rebirth, which made him reach the pinnacle of human perfection. He is as strong, fast and agile as it was possible for any human being but Nazis blew it up, leaving him the only recipient of the project. Steve, now called Captain America, helped the United States battle the Axis during the war with his sidekick Bucky, and they eventually won. Sadly, Cap was frozen in the Arctic Ocean and was left in suspended animation for many decades.

Years later he was thawed out and discovered that his old sidekick was brainwashed by Soviets into the Winter Soldier, and the two fought many times, during one such time, Cap had to keep a missile Winter Soldier was going to shoot from launching by stopping their fight to press the right combination of buttons, and he eventually won.

When Doctor Doom formed the Masters of Evil to steal the powers of Odin and rule the universe, Captain America joined Fury's Ultimate Alliance, and was one of the first four metahumans (the others being Spider-Man, Wolverine, and Thor) to come to the defense of the U.S.S. Alpha Helicarrier, where he found the Winter Soldier planning to shoot the Helicarrier's own guns into the engine along with Radioactive Man, both of whom are stopped by Cap and the team. Cap stayed with the team throughout the mission and finally stopped Dr. Doom who is left to the mercy of the gods.

Later Captain America joins Nick Fury on an unsanctioned attack as part of the main strike team on the country of Latveria and against the new prime minister, Lucia von Bardas, whom is presumed killed when they blow up Castle Doom. Lucia came back as a cyborg, however, to destroy New York, however she was stopped.

When the Super Human Civil War broke out, Captain America formed the Anti-Registration Resistance movement, reformatting old Hydra bases for their use. He also broke out fellow White Star members & Anti-Reg superheroes out of a Prison Convoy ran by S.H.I.E.L.D., led by Iron Man, many of whom's forces defected to Cap's side to form the White Star Guerrilla army. 2 weeks after that, the Anti-Reg forces are lead into a trap set by S.H.I.E.L.D. During the resulting fight, the Nanite network that kept the Thunderbolts in check gained sentience, calling itself the Fold. The network had the Thunderbolts brought to the plant (Venom (Mac Gargan), Green Goblin, Bullseye, and Lady Deathstrike) set up timed bombs to blow up the plant.

Captain America received a call from Fury about what happened at the plant. There wasn't evidence to have Cap believe him. Soon the White Star decided to stage a jail break in Prison 42. There he destroyed power cables that diverted power the the main systems of the prison, and the back-ups. Thus every Thunderbolt was released as well. The Fold also sparng into action, abducting superheroes for infection. Captain America and Iron Man became friends again because of that, recreating the Ultimate Alliance.

Congress decided do modify the Superhero Registration Act so that superhero identities would not become public knowledge, and said heroes would not be forced into mandatory police services. Several months later, Captain America, Iron Man, Spider-Man, and Thor are pursuing the Wrecking Crew under New York City's subway system. However, they surprisingly come across exposed Skrulls. Upon defeating the Wrecking Crew, the resulting incapacitated Skrulls are sent to the Raft for interrogation.

On a search for the real Daredevil & She-Hulk: S.H.I.E.L.D. gets a lead from, surprisingly, Vulture. Taskmaster contacts the Sinister Six, and Doctor Octopus is willing to spare Sandman. The squad is also joined by Cable, Kraven the Hunter (hired by Taskmaster), and Penance. Once sneaking inside: Captain America, Taskmaster, Spider-Man, and the Rhino finds Skrulls with Vulture, Cable (recently), and Daredevil captured; and She-Hulk has been moved from the facility. After freeing the superhumans, a fight ensues across the facility, with the Vulture impostor taken down, but the Cable Skrull escape. However, a Ghost Skrull confronts the team. Upon his defeat, the Skrull reveals that the Skrulls have infiltrated every superhuman organization by this point.

About 12 weeks pass, and a Hammer Industries facility is attacked by what appears to be the Crimson Dynamo. Captain America, his old partner the Winter Soldier, Iron Man, and Whirlwind are sent in to investigate. Upon arrival, the team makes their way to find Dynamo interrogating Justin Hammer on the progress of the updated Dreadnoughts. Hammer says the company finished the prototype, and that it's kept in storage. Dynamo notices the heroes, incapacitates Hammer, and taunts them as he races towards the storage area of the facility. Dynamo beats the team to the Dreadnought, but Iceman arrives with Valentin Shatolov (without his armor). This comes to no surprise that the "Crimson Dynamo" raiding one of Hammer's weapons facilities is in reality, a Skrull. The Skrull activates the Dreadnought, and leaves as he downloads the blueprints for the Dreadnought prototype into his armor. The prototype manages to injure Iceman before it is destroyed. The team finds the Skrull on the roof of the building, and proceeds to attack. Before his defeat, the Skrull manages to send the blueprints to wherever the Skrulls managed to set up shop on Earth (which was what he was doing on the roof). Since the UA destroyed his old one: Shatolov builds an upgraded version Crimson Dynamo armor, and forms a truce with them. Some time afterward - not wanting Stane Industries to go out of business from the Skrull's conquest of Earth, Iron Monger decides to join the Ultimate Alliance (much to Iron Man's discontent).

Retrieved from "https://marvelcomicsfanon.fandom.com/wiki/Steven_Rogers_(Earth-6109.2)?oldid=257391"
Community content is available under CC-BY-SA unless otherwise noted.