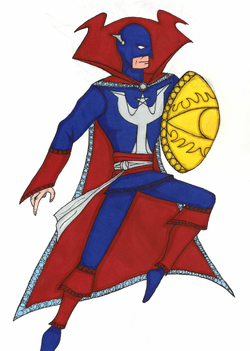 It was smart of you to hide us here. This Earth is the safest one we could possibly have gone to. The Skull will be here soon, after all, this is his closest Earth. But you're a damn good leader. It takes a lot to earn my trust, and you've got it.

Thawed for a Cause

Steven Rogers was identical to his Earth-616 counterpart up until he was frozen in the Arctic ice. When he was thawed out, it was not by the Avengers, but by Doctor Strange. His new presence in the world was masked by Strange while he resided in the Sanctum Sanctorum. One day, Amora the Enchantress released the fury of Asgardian warriors onto the Earthly plane. Steve fought bravely alongside Strange and the Avengers, however, he was badly wounded in the battle. After Strange himself bested Amora in a sorcery battle, and he closed the portal, Steve was brought back to the Sanctum.

Once inside the Sanctum, Strange cast a spell on Steve that would fully heal him of all his wounds by connecting his lifeforce directly to the flow of the universe's mystical energy. This means magic would have to be practiced regularly to keep Steve healthy. Steve asked Strange to teach him the benefits of magic, to which he agreed. Steve was tutored extensively in the arts of sorcery, eventually matching Strange in power. Strange then assembled a team comparable to the Avengers under Steve's leadership to protect the world. Steve also mastered the art of universe viewing/travel in order to protect against large threats.

One day, while scanning the Multiverse, Steve saw something that horrified him: an alternate version of the Red Skull that had gained the awesome abilities of Onslaught.

Retrieved from "https://marvelcomicsfanon.fandom.com/wiki/Steven_Rogers_(Earth-429378)?oldid=95249"
Community content is available under CC-BY-SA unless otherwise noted.