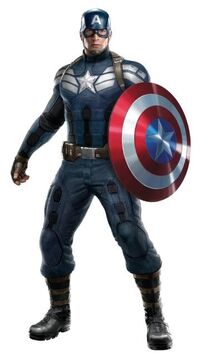 American
Occupation
Adventurer, federal official; intelligence operative, police officer, teacher, sparring partner, soldier
Education
High School dropout, later took classes at City Hall to make up for his lost time.
Origin
Origin
Steven Rogers was injected with the Super Soldier Serum making him Peak Human Conditioned, Steve became Captain America and was the flagship for America in WWII. After being frozen for 70 years Steve became the leader of the Avengers, a team of superheroes who saved the world on a daily basis.
First appearance
Unknown

Steven Grant Rogers was born on July 4, 1920 to Irish Immigrants Sarah and Joseph Rogers. Rogers grew up in the low suburbs of Manhattan where he was constantly bullied as he had a frail body and couldn't fight back, One day when Roger's daily bully arrived to beat him he was saved by a new boy who had started school.

Bucky Barnes became Steve's best friend as the two were inseparable, Bucky was with Steve through all his dark and light times as was Steve with Bucky. Until one day Bucky was enlisted in the US Army to help in World War II, Steve tried to join the Army so he could stay with Bucky but he was rejected for his frail body. Steve still kept trying hoping he could get enlisted, After many rejections Steve went to the local Cinema too watch a WWII video after being annoyed by a man talking during the film Steve entered a fight with the man but was saved by Bucky again.

The Super-Soldier Serum (SSS) metabolized and enhanced all of Rogers' bodily functions to the peak of human potential. Dr. Reinstein described this potential as being "the next step in human evolution", while still remaining completely human. The secret of the SSS formula was lost with Dr. Erskine's death.

Master Martial Artist: Master Martial Artist: Rogers is an expert in hand-to-hand combat being very skilled in multiple martial arts through his training in military combatives and instruction under various private instructors. He mainly utilizes American Boxing, Judo, Aikido, Jujutsu. However, he has utilized other martial arts including hand techniques in Ninjutsu, Karate, Muay Thai, Escrima, Chin Na, Wing Chun, Northern Shaolin kicking methods and Wushu with his gymnastics ability creating a style that suits his strengths and enables him to use his knowledge to the best of his ability. Rogers has displayed all types of martial arts techniques from physical combat to chi manipulation. He is considered one of the finest martial artists on Earth.

Master Shieldsmanship: His years of training and experience with his unique shield, as well as its physical properties, allow him to accomplish amazing feats with the item. Aside from bashing foes and blocking incoming attacks, he is able to throw it with nearly perfect aim. Rogers can hit multiple targets with the same throw by means of ricochet, and could even achieve a boomerang-like return effect, allowing him to strike enemies from behind or retrieve the shield without objects to ricochet from.

Master Tactician and Strategist: Rogers is an accomplished strategist. He had been widely considered one of, if not the greatest, tacticians on the planet, both on and off the battlefield. He is able to formulate battle strategies and his brilliant tactical sense allows him to alter any strategy to fit the changing need of the situation.

Master Acrobat: His years of training and experience have made him an expert acrobat, gymnast, and aerialist. He often utilizes these talents in combat for both evasive and offensive purposes.

Indomitable Will: Rogers has been captured many times by the Germans and HYDRA, Rogers has had to let most of his men die to keep secrets hidden from the enemy.

Professional Sketch Artist: He has great artistic skill which he developed from childhood. Rogers often worked as a freelance illustrator and sketch artist even loaning his skills to the NYPD for a time. He enjoys drawing and does so with his free time.

Expert Marksman: He can throw most projectile weaponry with great aim and is well-versed in the use of firearms, though he prefers not to use them.

Expert Swordsman: Steve is proficient with swords and staffs, but is more comfortable with his shield.

Weapons Proficiency: He does not typically utilize weapons other than his shield, but in desperate situations he wields additional weapons to ensure victory. He is proficient in wielding swords, daggers, throwing knifes, staffs, sticks, tonfa, axes, maces and even firearms.

Multi-lingual: Rogers is fluent in English, German, Russian, Spanish, Japanese, and some Italian. He might be lingual in other languages.

Transportation: As an Avenger, he travels via Quinjet or Sky-Cycle and formerly aboard SHIELD or military vehicles while on assignment. When not on patrol, Steve rides a Harley-Davidson motorcycle which he has had since WWII.
Weapons: