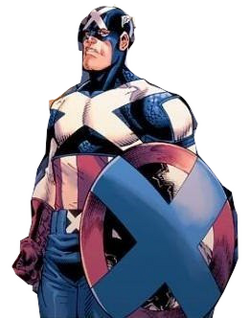 I'm here to talk about the X-Ceptionals. Some say that I have no place among them, that humans will eternally remain, or mutants, and that I have shamed America. And to those people, I saw screw you. Xavier's dream is nothing short of unspeakable, but the good kind. I will stand them, because America is and always was supposed to be the land of co-existence. As long as I breathe, and even through death, I will stand by them.

Steve Rogers' history is the same as that of his Earth-616 counterpart up until before he was thawed out by the Avengers.

Retrieved from "https://marvelcomicsfanon.fandom.com/wiki/Steven_Rogers_(Earth-3083)?oldid=79007"
Community content is available under CC-BY-SA unless otherwise noted.