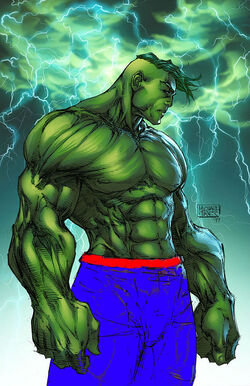 Green, as the Hulk, blue as Rogers
Hair

Single
Occupation
Member of the American Army, formerly fugitive, soldier
Origin
Origin
Alternate Captain America who was exposed to a gamma bomb and joined the American Army to fight an interdimensional threat.
Creators

Flag-man run. Skull not strongest one there is! HULK is!!! Hulk SMASH!!!

This counterpart of Steve had been thawed out by the time that Bruce Banner was testing his gamma bomb. Having failed to prevent Stark's weapons display, Steve was determined to prevent the gamma bomb from going off. He ran onto the field where the bomb was going off, much to the horror of Banner. Throwing his shield, attempting to slow the bomb's fall, he failed, and the bomb exploded on top of him. Without his shield, he was exposed to the full force of the bomb, and transformed into a hulking green-skinned monster. He soon became the target of the military, hoping to contain the now-mindless Rogers.

Retrieved from "https://marvelcomicsfanon.fandom.com/wiki/Steven_Rogers_(Earth-2536)?oldid=86912"
Community content is available under CC-BY-SA unless otherwise noted.