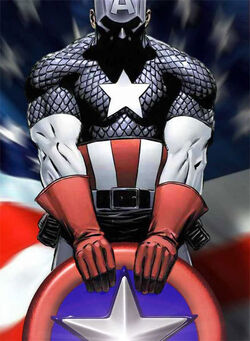 Single
Origin
Origin
From the early ages of a world war, he has returned to modern age and is a current founding member of the Avengers. He helps guide the insurgency against Iron Man's regime of injustice.
Creators

Steve has no superhuman capabilities.

Steve is trained and specialized in combat and warfare.

Retrieved from "https://marvelcomicsfanon.fandom.com/wiki/Steven_Rogers_(Earth-227)?oldid=107109"
Community content is available under CC-BY-SA unless otherwise noted.