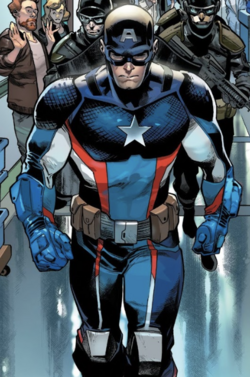 If this really is the end times... then we face it head on. We don't quit. We're Avengers!

Steve Rogers was selected as the first test subject for the Super-Soldier Project during World War 2. Steve was not chosen for his physical status, but for his heart. An accident involving Hydra led to Captain America being the only successful Super-Soldier ever created.

Near the end of World War 2, Captain America wound up encased in suspended animation somewhere in the North Atlantic Ocean. After approximately 70 years, he was unthawed by a group of superheroes called the Avengers, consisting of the billionaire genius Iron Man, the Norse God of Thunder Thor, the gamma-irradiated rage monster known as the Hulk, and the crime-fighting scientific duo of Ant-Man and the Wasp.

Captain America quickly became the leader of the team, partially in an attempt to find his place in this strange new world. He led the team for the next three years, making countless allies and enemies all throughout the cosmos. Two such allies included the only heroes to join the Avengers after their formation; the mutant twins Quicksilver and the Scarlet Witch, who came to look up to Captain America as their inspiration to be good, following a stint with their father, Magneto's cult, the Brotherhood of Mutants.

Eventually, there came a day one year on Christmas Eve when the Avengers discovered a plot to eliminate all of humanity by the combined forces of Red Skull and Loki, Thor's evil brother. They had developed a weapon using stolen Vibranium from the African Nation Wakanda, which they utilized by harnessing Bifrost Energy. Red Skull had made the threat to only exterminate half the planet if the other half didn't agree to his demands, but Loki's true intentions for the device were to unleash the full power of the Bifrost, eliminating humanity.

Captain America led all of the Avengers to Red Skull's secret base near the American-Canadian border in North Dakota. Captain America took point during the fight outside the base against Loki's army of trolls, while Iron Man, Ant-Man, and Thor went inside to try and dismantle the makeshift Bifrost. They eventually came to the conclusion that they could diminish the blast to just within a 10 mile radius. Captain America spent his final moments convincing the scared twins that if it came to it, they needed to fight until their last breath to save humanity.

The Scarlet Witch took Captain America's words to heart, and rushed towards the now activated Bifrost. As the others attempted to slow the descent, the Scarlet Witch attempted to use her hex powers on the Bifrost, which only ended up destabilizing the wormhole, sucking in all of the Avengers. Due to the makeshift Bifrost's destruction, there was a multi-dimensional explosion, leaving the fate of the Avengers unknown.

Retrieved from "https://marvelcomicsfanon.fandom.com/wiki/Steven_Rogers_(Earth-2266)?oldid=257398"
Community content is available under CC-BY-SA unless otherwise noted.