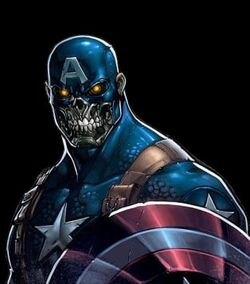 During the dark days of the 1940s that was the Second World War, a covert U.S. Military experiment turned the physically frail yet courageous Steven Grant "Steve" Rogers into the first Super-Soldier, Captain America. Throughout the war, Cap and his partner and best friend, Bucky Barnes fought alongside infantry and with a group of heroes known as the Howling Commandos. Weeks to months nearing the end of the war, Captain America and Bucky were both presumed dead in an explosion. Decades later, Rogers was found trapped in ice by S.H.I.E.L.D. and was successfully revived in the modern world of the 2000s. In his return, the legendary Captain America would then later go on to be one of the most important members of the Avengers as well as a leader of the superhero team almost everyone in the world ended up knowing and loving.

Almost a few months since the Chitauri-Skrull Attacks in New York has passed, Steve continued patrolling the city as Captain America, being the courageous and persevere leader of the Avengers that he still was. However, one day changed everything in the Captain's life as he noticed his friend and teammate Black Widow who started feeling sick and strange. During a reluctant duel with her, Rogers was painfully bitten by his comrade gone rogue before subduing her with the assistance of fellow Avenger Hawkeye. Succumbing to what has already gotten within Romanoff's system a few days earlier, Rogers too have started experiencing a series of hallucinations of his worst nightmares as its initial yet already mild symptoms. In the next following days, Steve began to reminisce of his former adversaries in the Second World War: Hydra.

In his spare time, a deluded Steve decided to investigate whether what he were seeing was true, trying to find out if his late arch-nemesis, the Red Skull, the head of Hydra was still alive at the time. This worsening symptom of Steve even rendered him great lengths to revisit the secret headquarters of his former training site in Camp Lehigh, where he would unravel the darkest secrets of S.H.I.E.L.D. Rogers discovered that Hydra had existed in secret as a parasite within S.H.I.E.L.D. due to Arnim Zola's survival having uploading his consciousness within Camp Lehigh's computer networks, and the long-awaited return of the Red Skull himself, who was revealed to be hiding inside the facility ever since he survived his last confrontation with the heroic Captain.

The Red Skull found himself surprised to see Rogers condition, seeing his enemy in the same situation, being infected with "the sickness" just as he was, which Rogers found perplexing considering that Black Widow's case was thought to be one of a kind. Unfortunately, before could have told him anything else about the mysterious condition, an uncontrollably vengeful Rogers, unknowingly driven by the symptoms of "the sickness" that infected him, lashed out at the dying Skull, whom he had beaten into a pulp before his head was painfully mushed with the Captain's own shield, effectively killing him, but at the cost of the Skull's pathogen transmitting to the Captain moments before the former's death. An alarmed Zola tried to activate a lock down protocol to keep Rogers locked within the secret facility along with the "sickness," only to be completely intervened as an enraged Rogers impulsively smashes his mainframe with his own fists, which surprisingly infected Zola's digital consciousness with "the sickness" in the process.

This instance has drove Zola in a state of technological insanity, causing him to malfunction which led to the accidental activation of missiles heading toward Camp Lehigh as an attempt to prevent the sickness from spreading outside the facility. The missiles destroyed Camp Lehigh, and Zola's mainframe with it, though Captain America himself was able to survive albeit barely thanks to his Vibranium Shield. Rogers, heavily-scarred inside and out, then exited the ruins of Camp Lehigh's facility, rendezvousing back to the Triskelion in his goal to question Nick Fury in person on truth about everything Rogers' has yet to know about S.H.I.E.L.D. and Hydra, not caring enough of the far deadlier sickness that was currently and discreetly festering on him slowly and painfully.

Unfortunate for Fury and the rest of S.H.I.E.L.D., this state of Rogers was in, was definitely not to be taken lightly and should be given attention more than their Hydra situation. On the fateful moment of their meeting, Captain America became overwhelmed with sickness and madness as he tried to pursue a one-man crusade on taking down Hydra within S.H.I.E.L.D., which he also aimed to deal with afterwards for letting their guards down for the past decades. In this attempt, Rogers bursts into berserk with the help of Fury and other loyal agents, beating almost every sleeper agent who tried to silenced Captain America from exposing their existence, but in doing so the hero has inevitably spread the very "sickness" the Red Skull has been warning to him earlier. As days went on, the entire country became engulfed with the infected, including the unhinged Rogers himself, who subconsciously call themselves as the collective "Festering Dreamers". A week and a half has followed, most of the western world shared the same fate as America has, bringing cities into ruins and forcing those who couldn't bear either the symptoms of the sickness or the grim reality that they were living in, into taking their own lives.

Retrieved from "https://marvelcomicsfanon.fandom.com/wiki/Steven_Rogers_(Earth-21410)?oldid=268398"
Community content is available under CC-BY-SA unless otherwise noted.