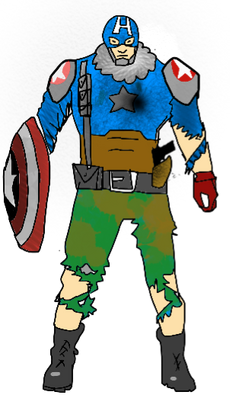 Steven Rogers is the son of Shelby and Grant Rogers. He was born after the Secret Invasion of Latviana.

His dream was to join the US Army. After ten years, he was bullied by street kids, but was rescued by James Barnes, a United States Army Veteran.

After nine years, he was brought to Abraham Erskine's Labs, where he gets mutated. He then joined WWII alongside the Invaders.

Later, his friend James was killed by Herr Kleiser. He later got revenge by snapping Kleiser's neck.

Later, during the Hiroshima Bomb Drop, he killed a racist Japanese Cult. He would later fall to his death. After Sixty-Six years, he was reveled to have survived due to Suspended Animation. He later joined the Ultimates and shortly thereafter left the team to join the Avengers.

The same as those of his Earth-1610 counterpart.

Retrieved from "https://marvelcomicsfanon.fandom.com/wiki/Steven_Rogers_(Earth-1619)?oldid=257403"
Community content is available under CC-BY-SA unless otherwise noted.