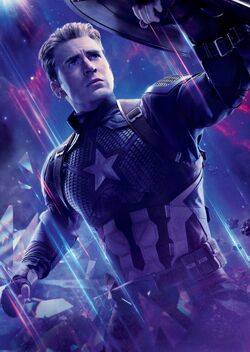 I don't do this for the glory, unlike some of you. I'm here to make a difference in the world. But every day, I wonder if the difference I'm making is the kind I sought out to inspire.

Steve Rogers was always small and frail. He got picked on, but he never let that diminish his spirit. After graduating High School, he enlisted in the army, where he met and fell in love with James Barnes. The two were separated while on a mission, and James was presumed dead. Steve suffered a leg injury and was honorably discharged. It was then when he was approached by Potts International, who offered to make him whole again. Apprehensive but seeing no other option, Steve accepted.

He was put through the process of Terrigenesis, and came out changed. His muscular structure was enhanced, and his skin became near bulletproof. With Potts seeing him as the perfect candidate to spearhead their "evolution initiative". They placed him in charge of the premiere superhero team consisting of other specifically bred Inhumans, the Squadron Supreme.

Donning the identity of Captain America, Steve wanted to do everything he could with the power he was given to help the world. But the bureaucratic red tape put in place by Potts International made that hard for him. So did the manufactured personality they wanted to put forward for him.

After the Squadron fought against the secret organization known as AIM for years, Steve discovered that their premiere assassin, the Winter Soldier, was none other than the love of his life that he had believed to be dead all these years. James Barnes was alive, and he wanted Steve dead.

Retrieved from "https://marvelcomicsfanon.fandom.com/wiki/Steven_Rogers_(Earth-1515)?oldid=245839"
Community content is available under CC-BY-SA unless otherwise noted.