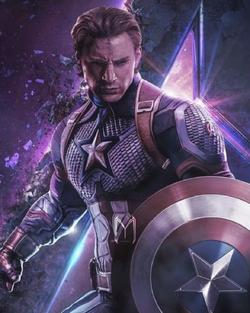 We know what's waiting for us on the other side. We know the things we have to do are near impossible. But we also know what happens if we fail, and I'll be damned if any one of us wouldn't give anything to stop it. Even our lives, if that's what it comes down to. I want you all to know that no matter how this ends, it's been an honor calling you all my teammates, and even more importantly, my friends.

Steve Rogers was born in a poor neighborhood in Brooklyn in the early 1900's. Growing up, he was always frail and weak, but never scared to stand up for himself. His best and only friend was always James "Bucky" Barnes, who wanted to protect Steve, but always knew he wouldn't let him.

Steve's parents both died of disease before he graduated High School, and from then on he was raised by Bucky's parents. Not long after, World War 2 broke out, and Bucky enlisted to fight for his country. Steve tried, but was rejected multiple times for his frail structure, asthma, etc.

After falsifying his enlistment information multiple times, he was noticed by Abraham Erskine, who worked for a secret government program attempting to breed the Super-Soldier. After an interview with Erskine, he determined that Steve's purity of heart made him the perfect candidate, and he was chosen as the test subject. Before being transformed, he met and became friends with Howard Stark, who explained the process to him.

Steve had second thoughts about the procedure the night before, but after discovering that Bucky had been kidnapped by the Nazi science division, Hydra, he didn't hesitate to go through with it. His frail structure was then replaced with near bulletproof muscles and he was given the codename "Captain America" so that the government could use him to sell war bonds and inspire hope.

But Captain America had bigger ideas. He struck out on his own and broke into a Hydra base to free Bucky and the hundreds of other soldiers that had been captured by them. He then formed a team dubbed the Howling Commandos, whose sole purpose was to take down Hydra.

After suffering insurmountable losses, including Bucky's apparent death, Steve dedicated everything to bringing down Hydra's leader, the Red Skull. During their final confrontation in a Hydra jet filled to the brim with bombs, the Skull was accidentally transported across space, and Captain America was forced to crash the jet in the ocean so that it wouldn't explode on contact with land.

For the next seven decades, Captain America remained frozen in suspended animation, kept alive only by the Super-Soldier Serum. He was eventually recovered in the modern day by S.H.I.E.L.D., the organization that formed from the ashes of the Howling Commandos. He was then inducted into the Avengers Initiative alongside other heroes Iron Man, Thor, Captain Marvel, Hawkeye, Black Widow, and the Hulk to combat the incoming invasion of the Chitauri, led by Thor's evil brother, Loki, who had allied himself with Hydra.

After the Avengers won the war against Hydra and the Chitauri, they broke away from S.H.I.E.L.D. after the controversy of the Avengers being controlled by a biased shadow government. Since then, they've elected Captain America their leader and begun to expand their membership to include other heroes like Black Panther and Ant-Man and the Wasp.

Eventually, Captain America and his teammates, Iron Man and Thor, found themselves thrust into the future where they discovered Thanos had collected all six Infinity Stones and destroyed the Earth, conquering the galaxy. Acquiring as much information as they could before they were thrust back, they compiled a list of events over the next ten years that they needed to prevent in order to save the Earth.