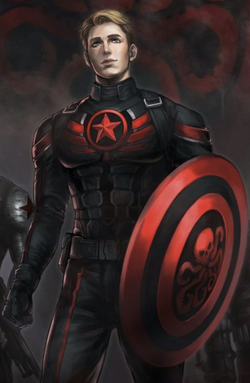 Steve Rogers became Captain America during World War 2 after being injected with the Super-Soldier Serum. He spent several years fighting before being trapped in suspended animation for decades. After being revived in the present, he became the leader of the superhero team known as the Avengers.

Cap helped to lead the charge against Thanos during his hunt for the Infinity Stones, which led to him losing several of his closest friends, including Bucky Barnes, who was impaled with his own bionic arm by Cull Obsidian. Captain America was one of the survivors of the final assault against Thanos, but his psyche did not leave intact.

Having already collected all six Infinity Stones, Thanos rewrote Steve Rogers's brainwaves into becoming the loyal Head of Hydra, who led the organization under Thanos's rule, in order to keep the people of Earth in line. In the years since Thanos's take-over, Captain Hydra has become one of the most feared humans throughout the galaxy.

Retrieved from "https://marvelcomicsfanon.fandom.com/wiki/Steven_Rogers_(Dimension_0)?oldid=263475"
Community content is available under CC-BY-SA unless otherwise noted.