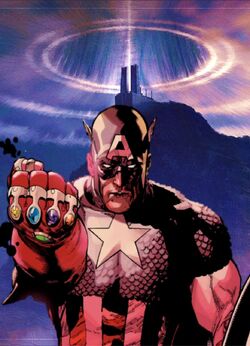 My life was a one great lie, but if it wasn't for this thing inside me, I wouldn't even be here...

Captain America seemed to have the same history with his Earth-61615 counterpart, including the moment he died from sacrificing himself during the Battle for America, or at least he once thought it was the case. At some point in his later life (before the final incursions came to their reality), Steve had a long-time romantic relationship with his fellow S.H.I.E.L.D. agent, Sharon Carter (who was also Peggy Carter's coincidental niece), in which they eventually got married. Later on, Steve and Sharon had already been conceiving a wonderful child, and were going to decided in naming him James the day he'll be born.

However, contrary to what Steve had believe, were all just fragmented augmented simulations implanted to him during his creation, along with the formation of the patchwork planet known as Battleworld. As a result of his creation at the hands of the cosmically powerful Beyonders, this led to him believing that he was the actual real prime counterpart of himself who was "resurrected" at some point after he died in the Battle for America. It was not fully explained to how he was resurrected, although it was hinted that it was due to his exposure to the effects of the Reality Stone, used by someone within his allies to bring him back to life, before the stone itself was kept in another location somewhere throughout the intergalactic community.

Much to his despair for realizing the whole truth later on, Steve had to endure living a modified simulation of his own life, which even included him witnessing the incursions between his Earth and another planet and escaping through one of the last remaining life rafts, a regrettable action that led to his own wife, unborn child, and all of his loved ones and allies' unfortunate demises after witnessing their life rafts accidentally collide into another, leaving him with the guilt of a lifetime for not being able to save them from the ending world. Still weeping at the edge of his universe's void, Steve would later travel across the regions of the cosmos, desperately and persistently searching for answers to why and how he may be able to find a way to restore everything back to normal.

Searching the entire life raft for days in hopes of finding even at least one or more possible answers, Steve only found little progress on his objective as he set his course to the benevolent planet of Xander in order to get help, to the point where he suddenly remembers the trauma he had to experience, causing for him to lash out both in rage and grief for his loved ones, painfully breaking some few walls inside the ship with his own bare hands as he mourns for his ultimate regret of actions. As weeks have passed by, Steve was able to survive starvation and dehydration thanks to already stored food and other emergency supplies. However, there comes a day when Steve was faced to make a risky decision in his journey when he witnesses the various types of heavenly and astronomical bodies around him collapses into a supernova-like state, which all could burst at any moment.

At that point, Steve had no other choice but to take a leap of faith after discovering a wormhole near him, making the reluctant decision to enter the interstellar bridge, not even knowing where exactly it may lead him. Entering through the wormhole, Steve's life raft slowly breaks in pieces as the raft begins to move at the speed of light. Realizing the possibility that he could die at any moment just as well, Steve reminisces all of his greatest memories, slowly closing his eyes in tears, embracing his own fate. However, in a moment of clarity, Steve was forced to open his eyes seeing a bright flash of light, finding out that he has reached it at the other side of the portal, rendering him speechless for seconds, right until he came into his senses when he saw the planet Xandar with his two eyes.

While the fateful discovery relieved him at first, Steve's euphoric emotions turned upside down, witnessing most of the planet engulfed in flames. Despite this, Steve still prepared to land his greatly damaged aircraft at the planet's exosphere in order to save anyone who's still out there, only to be abruptly interrupted by a larger ship in orbit, revealing to be the Quadrant, one of the Guardians of the Galaxy's recurring ship, which then rescued him from causing his own impending doom, much to Steve's surprise. Now boarding the Quadrant, Steve went aggressive to the ship's crew, still unaware to who they were, right until he was stopped by his long-time ally, who was none other than Adam Warlock, who was also heavily relieved that he finds his fellow comrade once more.

As Steve reconciles with his cosmic ally, he would learn the harder, more painful truth that was the apocalyptic & mysterious phenomena that killed everyone he loved, known as the incursions. Warlock elaborated to Steve that he sensed that a mysterious powerful cosmic force and its great dominion were the ones truly responsible for the multiversal chaos going on, fearing the accurate possibility that the "nigh is near," much to Steve's confusion's to what he exactly meant. In response, Warlock diverted Steve's wonders and led him straight to his most plausible solution, which was the search for the so-called "Eternity Gauntlet" (a lot more powerful version of the Infinity Gauntlet previously forged by the First Firmament), which should end the premature heat death of the known multiverse and revert everything back to normal, a series of words Steve had never expected but had always hoped to hear since everything happened to him in a moment he didn't even want to remember.

But in this glimpse of hope, Steve has now thought of the greatest and brightest goal of bringing back his old life, allies, and loved ones. Afterwards, Steve, Warlock and his new crew set their course to, in their mission to acquire the Eternity Gauntlet and try to end the ongoing chaos, once and for all. For the next few months, the Quadrant has traveled across the unknown regions of the universe, where they also reluctantly waged war against those, including the most dangerous of space pirates, who wanted the allegedly "multiversal" gauntlet for themselves and their own personal and selfish agendas. Ultimately desperate in saving the multiverse, Steve started becoming much more and more insanely ruthless than he was before in dealing with their adversaries, much to Warlock's concern that Steve's growing compulsion might be getting out of hand from time to time.

Nevertheless, the Quadrant was able to successfully travel to the secret location of the "Eternity Jewels" (the essences of the gauntlet), the Far Shore, in a span of five straight months. As they enter the darkness of the Far Shore, Steve prepares to gear up his cosmic suit, along with Adam Warlock who still seemed suspicious to how Rogers would act next, seeing him in his worsening emotional and mental state. At that point on, Warlock decided to keep an eye to his own comrade out of sheer concern. Leaving the Quadrant out into the inner regions of the Far Shore, the pair searched and searched to find the jewels, only to be ambushed by the lethal guardians of the realm, the Aspirants.

Although the pair was struggling from the Aspirants' deadly attack, Warlock made the risky but one-sided self-decision to sacrifice Steve into the ravenous Aspirants in order to get himself to find the Eternal Jewels. In Warlock's defense, he was doing it for his own good, to end Steve's "suffering" since he lost everyone he loved during the incursion. Much to Steve's despair from Warlock's betrayal, the former could only scream in anger and vows vengeance for the force responsible for all the occurrence going in with his life instead of pain and agony, as he gets tackled by millions and millions of Aspirants with the intention of slaughtering him into pieces.

With his decision to sacrifice his own long-time comrade, Warlock would later find out that the cosmic stones were actually being guarded by none other than the First Firmament itself. Despite Steve already getting slaughtered at the hands of the Aspirants, he somehow was able to unintentionally prove his worth to the First Firmament by staying alive, as the first cosmos then appoints the dying Avenger the Eternal Gauntlet, instead of giving it to Warlock, who got to the entity first. With the Gauntlet now in Steve's possession, to which he absorbs six of the jewels into the cosmic glove, he was able to restore himself back to his well state, which enrages Warlock for the abstract entity's sudden change of mind to hand the eternal power to Steve.

As a result, Warlock tries to attack Steve, angrily screaming that possessing the jewels were meant to be his destiny, although the mad messiah were no match for the multiversal power of Captain Eternity. In a matter of moments, Steve single-handedly defeated Warlock, who also asked his old friend to join him in his new quest, now that Steve has nigh omniscience to know that the ultimate force behind the premature heat death of the multiverse, were none other than the cosmic race known as the Beyonders. Despite this earth-shaking revelation, Warlock continues to fight Steve, who insists that he would be the one saving the multiverse, not Steve.

Growing tired of Warlock's whiny malediction, the First Firmament immediately obliterated Warlock out of existence, killing him, much to Steve's surprise and confusion. Steve would then learn the First Firmament's reveal that it was only using Steve as its physical host in his longing planned battle against the entity it only called the Eternal Empress, whom it deemed was the supreme one waging war throughout the multiverse for millions and millions of years. Devastated, Steve has now realized that he was trapped inside the vast void of the first cosmos, struggling to find a way to escape from his clutches. In the supposedly last moments of Steve, he tried his to convince the First Firmament as he greatly makes a deal with the entity at the very end of the world by having by having a symbiotic relationship, in which it somehow agreed.

Seemingly those to Steven Rogers of Earth-61615, with additional cosmic power from the First Firmament.

Equipment: Seemingly those to Steven Rogers of Earth-61615.

Retrieved from "https://marvelcomicsfanon.fandom.com/wiki/Steven_Rogers_(Battleworld)_(Marvelous_Multiverse)?oldid=229294"
Community content is available under CC-BY-SA unless otherwise noted.