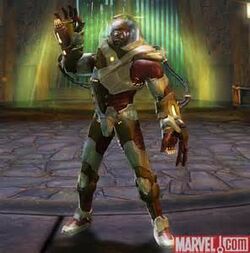 Little is known about the Scorcher's life before the Secret War. It can be assumed to be similar to his mainstream counterpart.

Scorcher and Wizard fight the Ultimate Alliance at the castle gates. He also participated on the Latverian strike against New York. Scorcher was eventually indoctrinated into the Thunderbolts by S.H.I.E.L.D. He was among the Fold operatives during the Prison 42 breakout; guarding the portal alongside Whirlwind, Electro, the Grey Gargoyle, Moonstone, the Lizard, and Diamondback.

Retrieved from "https://marvelcomicsfanon.fandom.com/wiki/Steven_Hudak_(Earth-6109.2)?oldid=128936"
Community content is available under CC-BY-SA unless otherwise noted.