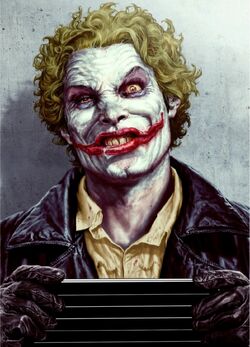 Wanna hear a joke? Neither do I...

Steven Jackson Binst was a former leader of a notorious European and American based white supremacist gang known as the Fascist Brotherhood of Superiority, something that he once have consistently led a long ago before he became the infamous Whiteface, a dangerous madman who usually dresses like a sadistic form of clown and commits violent crimes across the already corrupted and morally-polluted cities of New Troy, most especially Squadron City. During a confrontation against the new vigilante Nighthawk who intervened their assault on a group of African-American supporters, the latter was able to defeat and apprehend most of Binst's subordinates to the authorities, leaving him to challenge Nighthawk, one-on-one. At the end of their duel, a weakened Binst ended up being exposed to chemicals in an accident that bleached his entire body and drove him completely insane, and he swore revenge on Squadron City for creating him, though later on he would seem to justifying his heinous crimes as "repaying" the gift that has been given to him, a gift that was the chemicals that drove more even more insane that he already was before which led him into becoming Whiteface.

As Whiteface, the latter would end up becoming Nighthawk's arch-nemesis, due to him having to cause Nighthawk more suffering than any other villain the hero has ever faced. Whiteface's real identity remained a mystery to everyone else, including Nighthawk himself, however it all changed, after Whiteface himself would reveal his dark and tragic past and origin as Binst to Nighthawk. Well into his late forties, the eventually defeated Binst spent almost a decade at the Ravencroft Asylum in a near catatonic state after a seemingly one last encounter with his archnemesis.

Nighthawk met the newly-elected Deputy Mayor of New Troy, who told him that people were no longer reporting crimes in the south and west sides of the city because they wanted Nighthawk to take care of crime his way. Meanwhile, Binst would suddenly wake up after several years and walked out of his minimum security correctional facility, made up as a clown, and drove to New Troy, returning into his life of crime once more, though nobody else would knew, this would be his one last straw.

Five weeks later, after saving a baby from death and taking him to Kyle's long-time love interest and close friend, a woman he once knew, named Doctor Beatrice Arredondo (who was also the daughter of loyal and righteous police commissioner, Jacob Arredondo), Nighthawk encountered an epidemic of drug addict deaths all over New Troy. As the death count rose to thirty-eight hundred over three days, the governor was helpless to stop the circulation of poisoned drugs. Nighthawk interrogated a federal judge to try to find the supplier, to no avail. Later Binst, made up as a clown, went to a birthday party for the mayor's 6 year-old son, killing the mayor's son and wife using balloons filled with poison gas. The mayor, grief-stricken, committed suicide during a press conference, but not before calling on Nighthawk to kill Binst on his behalf, knowing that Nighthawk would go to extreme measures to those permanently punish those who would commit the worst of crimes.

A manhunt for the killer began in Grant Park, where the mayor's wife first met Binst. Nighthawk tracked Binst down to an abandoned warehouse, but was knocked out by Binst with sleeping gas. After escaping Binst, Nighthawk was exposed to the poison. Nighthawk, out-of-costume, went to see Dr. Arredondo. After uncomfortably and forcibly kissing her, he asked about the baby he saved named "Baby Doe". After Kyle leaves, Dr. Arredondo went to the nursery to look in on Baby Doe. Unknown to Dr. Arredondo and Nighthawk, Binst takes down Nighthawk, shoots down Dr. Arredondo through her spine, devastatingly paralyzing her, and then takes Baby Doe.

After finding Dr. Arredondo painfully paralyzed, Nighthawk carried her and immediately brought her into the nearest hospital throughout New Troy, before he continued his search, grudgingly looking for Binst. The Deputy Mayor of New Troy then gives a press conference and says that "Whiteface is dead". Nighthawk tracks Whiteface to a chemical treatment plant with Baby Doe in hand. Face to face with Nighthawk, Whiteface said how the two men are "opposite sides of the same coin". Before the final duel between the two concludes, Whiteface even taunted Nighthawk that since Nighthawk couldn't even kill him before, he could never do it, ever. After a fight and saving Baby Doe from the hands of Binst, Nighthawk fires a grappling hook gun through the Whiteface's midriff, then snaps the killer's neck and drowns him in untreated sewage, the same sewage where Binst first became the psychotic and insane Whiteface. And afterwards, just like that, Nighthawk has finally done the very thing he once pledged into never doing, ending his own worst enemy by literally reluctantly ending his life, once and for all.

Despite his ultimate death at the hands of his archnemesis, Whiteface's lifeless body was revealed to have swept by the waters of an underground sewer. With his corpse being a target to rats and other sewer dwellers, with his suit destroyed by the damage it sustained, his dead body lands at one of New Troy City's unguarded sewer systems having been swept out there via the sewer drains. At some point during the night, a mysterious figure, showing in the eerie form of an alien lifeform or entity, found the corpse of Binst in the New Troy sewers and had its techno-organic drones took his corpse to a location yet to be revealed. Soon later at some unknown point forward in time, Steven was eventually resurrected by the entity who abducted him, although he was yet to wake up, it was shown that his unconscious body was now being held at a medical capsule, activated by a life support system. Observing from its unknown main headquarters, the entity now predicts that Whiteface would be waking up very soon, much to his delight.

Retrieved from "https://marvelcomicsfanon.fandom.com/wiki/Steven_Binst_(Earth-61712)?oldid=232438"
Community content is available under CC-BY-SA unless otherwise noted.