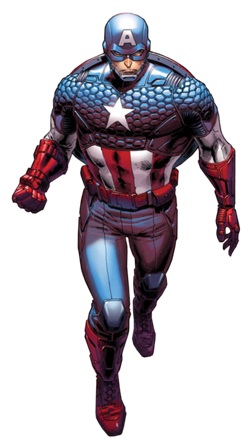 Steve Rogers was born July 4, 1920, to poor Irish immigrant parents, Sarah and Joseph Rogers. Rogers grew up a frail youth during the Great Depression in America. Little else is known about Rogers' early life other than the fact that a strong sense of duty, honor, and humility was instilled in him; perhaps due to his Irish Catholic upbringing. Rogers' father died when he was a child and his mother died from pneumonia later, when he was in his late teens.

Horrified by newsreel footage of Nazis ransacking Europe and atrocities in Asia that the Empire of Japan committed in China and Korea, Rogers tried to enlist in the Army and was rejected as 4-F because of his frailty and sickness. Overhearing the boy's earnest plea to fight for his country, General Chester Phillips, of the US Army, offered Rogers the opportunity to take part in a top-secret performance-enhancing experiment called Operation Rebirth. Rogers agreed and was taken to a secret laboratory in Washington, D.C., where he was introduced to Doctor Abraham Erskine (code named Professor Joseph Reinstein), the creator of the Super-Soldier Serum. After weeks of tests, Rogers was at last administered the Super-Soldier Serum. Given part of the compound intravenously and another part orally, Rogers was then bombarded by vita-rays, a special combination of exotic (in 1941) wavelengths of radiation designed to accelerate and stabilize the serum's effect on his body. Steve Rogers emerged from the vita-ray chamber with a perfect human body. A Nazi spy, who observed the experiment, murdered Dr. Erskine mere minutes after its conclusion. Dr. Erskine died without fully committing the Super-Soldier formula to paper, leaving Rogers the sole beneficiary of his genius.

Steve then trained in the US Army, he was sent on a mission to Greymore Castle to save a group of Soldiers on of which was his friend Bucky Barnes. Steve then came Face to Face with Johann Schmidt the first Super Soldeir.

The Super-Soldier Serum (SSS) metabolized and enhanced all of Rogers' bodily functions to the peak of human potential. Dr. Reinstein described this potential as being "the next step in human evolution", while still remaining completely human. The secret of the SSS formula was lost with Dr. Erskine's death Artificially Enhanced Physiology: Rogers has no superhuman powers, although as a result of the Super-Soldier Serum, he was transformed from a frail young man into a "perfect" specimen of human development and conditioning. Rogers is as intelligent, strong, fast, agile, and durable as it was possible for a human being to be without being considered superhuman. Although the SSS is definite, he maintains an overall healthy lifestyle including a regular exercise regimen and a balanced diet.

The shield has great aerodynamic properties: it is able to slice through the air with minimal wind resistance and deflection of path. Its great overall resilience, combined with its natural concentric stiffness, enables it to rebound from objects with minimal loss of angular momentum. It is virtually indestructible: it is resistant to penetration, temperature extremes, and the entire electromagnetic spectrum of radiation. The only way it can be damaged in any way is by tampering with its molecular bonding.

Retrieved from "https://marvelcomicsfanon.fandom.com/wiki/Steve_Rogers_(Earth-2226)?oldid=171362"
Community content is available under CC-BY-SA unless otherwise noted.