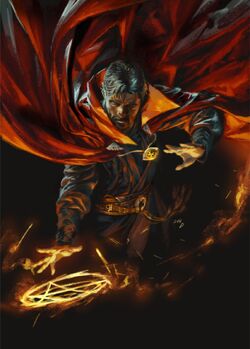 Black, with white at his temples
Status
Marital Status

Before the years of Ultron Revolution, Doctor Strange seemed to have the same history with his Earth-61615 counterpart, until Ultron started an all-out war against humanity and those who dares to oppose him and his ideologies.

Only after a few months the long-time war against Ultron had started, Stephen and the rest of the remaining heroes and villains were forced to retreat below the secret underground city that was previously constructed by Stark Industries, as in case of emergencies caused by possible global catastrophes. After the modest sacrifice of those who were willing to gave up their lives so that the others can be saved during Ultron's global annihilation, Stephen was one of the those who still made it until the fifth year of Ultron Revolution has finally arrived. By that time, Strange eventually felt a mysterious and an eerie awakening, signalling the presence of an unholy and a imperious powerful spirit that dwells among the face of the Earth.

The Arrival of Nightmare

Thanks to the Sorcerer Supreme and the surviving Masters of Mystic Arts' efforts to safeguard the world from mystical threats, the horrendous and the demonic entity known as Nightmare was finally sensed, when they all felt that something was wrong with several heroes and villains, and even a few civilians at their safe headquarters after they showed several eerie and strange symptoms, not even modern science could've explain, except for magic, which Strange had found the explanation for.

For the mean time, Strange casts a calming spell to the infected individuals who were starting to lash out in rage out of fearing the following terrors and nightmares that saw in their dreams. While they were put into quarantine, Strange had the help of a few heroes who had fought off the effects of Nightmare, including the remaining members of the Defenders, to help him track down the source of who was giving these people never-ending nightmares.

After a long-whole search all the way through several dimensions throughout the entire universe, starting from the Underspace to the Overspace, Strange and the Defenders have finally found their way into the mystical Dream Dimension after they chose to enter in a deep sleep using a magical spell together with Hank Pym's invention, the Dream Machine, to which Strange and the Defenders were transported into the Dream Dimension at will. Arriving at the dimension, the heroes finds Nightmare where they had confronted him, sitting in his throne.

During their confrontation, Strange told Nightmare that he and the Masters of Mystic Arts had known all about his history, questioning Nightmare of how he managed to return into present day, not after the former Sorcerer Supreme. Agamotto, had defeated him back during the Stone Age. Nightmare only responded that it was a quite long & complicated story. The heroes then asked his reason for returning, and in response Nightmare confidently and arrogantly tells them his entire plans on tearing their world and building it with only fear itself. Hearing the following threats upon their world, Strange tried to make a bargain with Nightmare. Nightmare simply agreed, but not after he orders all of his corpse army to kill off the heroes, especially Strange so Nightmare could use the Sorcerer Supreme as a battery and as a compass for him to devour all of the fear in the multiverse.

In the ensuing battle, Strange and the Defenders managed to defeat all of them, impressing Nightmare which made him agree to his pleas of bargaining with him. Nightmare then asked what kind of bargain does the heroes wanted, with them responding that they wanted to bargain for Earth's protection from his clutches. Nightmare agreed, in one specific condition, revealing that as long as Strange gives him all the secrets of all magic throughout the multiverse, he would keep Earth out of his harm. However, Strange was shocked by this exchange and immediately rejects his offer without any hesitation, avoiding the risks that Nightmare would still break their agreement in the end.

Nightmare maniacally laughed, telling Strange that he reminded him of the last Sorcerers Supreme, who never accepted most of their bargains with Nightmare. In response to the heroes' rejection, Nightmare told them that they were unfortunate enough to have come to the Dream Dimension, only to die out of fear, all for nothing. Nightmare then re-summons his army of terror to end the heroes. The heroes tried to fight all off the corpses but unfortunately, they were too many, and every time one gets killed, another rises from the dead. To that point, however, Strange thought of doing something unthinkable, something preposterous but efficient enough to prevent Nightmare from ever entering Earth and attempting to rule it.

In the very finale, Strange decided to heroically sacrifice himself to save humanity from Nightmare. As the battle goes on, Strange demands his teammates to leave the dimension and wake up before saying his goodbyes to them, which only made them a lot more confused of what was going on with Strange. Strange explained his plans for sacrificing himself to save Earth from Nightmare, but the Defenders thought it was insane for him to be left behind. Having no other choice, Strange unwillingly casts a spell at his teammates, which made banishes the Defenders out of the Dream Dimension, waking up in real life. Now entrapped for the rest of his life inside Nightmare's Realm, Nightmare sarcastically praised the Sorcerer Supreme's brave and courageous act for giving his own life for the sake of Earth's salvation. The demon then retells Strange same thing they told them as they fight his unstoppable undead army, and reminded him that his intentions on staying there would only lead him through eternal death.

Strange then reveals to Nightmare as he uses the Eye of Agamotto create an infinite time loop and intended to force Nightmare to relive the moment of having Strange inside the realm forever, keeping the demon from ever reaching Earth, as long a the loop goes. In response, Nightmare was still unfazed by his actions, and was actually looking more forward towards killing Strange for the rest of his life until he finally reaches the intent of killing the Sorcerer permanently, so he could finally use him for his own benefit of gaining full power over sorcery.

Strange also believed that he's gonna have a lot of fun battling Nightmare for the rest of his life. As Nightmare leaves his throne to finally confront Doctor Strange far off from the distance, he takes on his warrior form, arrogantly telling that Strange wouldn't like it. Strange begged to differ, before the two charges off towards the same direction, and started fighting. From point on forward, Nightmare and Doctor Strange apparently continued to clash as they seemingly die again and again, in the Dream Dimension, trapped in a time loop for all eternity.

After a while when one of the creators of the multiverse, the Beyonders' actions upon starting the end of the multiverse have triggered the cosmic phenomena known as incursions, the eternal battle between the Sorcerer Supreme and the Ruler of the Dream Dimension inside their realm has finally ended. During the end of it all, Nightmare ultimately had the chance to have his victory against Strange and with the Eye of Agamotto's effects inside the realm somehow diminished due to the incursion's reality-altering effects.

Consequently, Nightmare was able to destroy the Eye of Agamotto from Strange and taking on defeating the sorcerer in the process. Vanquishing the Sorcerer Supreme in his hands, Nightmare was just about to use his powerful ability to absorb all of Strange's essence using his own fears against him, until the demon was miserably interrupted as the Dream Dimension had started collapsing as everything around it slowly fades into nothingness, including Nightmare and Strange, which were both apparently killed at the end of the universe.

Retrieved from "https://marvelcomicsfanon.fandom.com/wiki/Stephen_Strange_(Earth-61616)?oldid=224361"
Community content is available under CC-BY-SA unless otherwise noted.