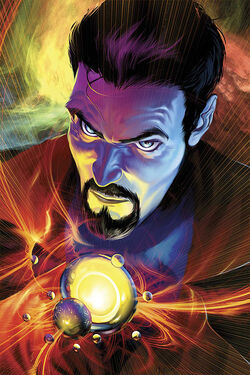 Black, with white at his temples
Status
Citizenship

Impossible? I've already learned to never use that word in my line of work...

Stephen Vincent Strange M.D., Ph.D was a physician-scientist who specialized in neurological surgery and his research focused on stimulation neurogenesis, which is the formation of new nerve cells. As his medical career progressed, his popularity increased to the point where he was secretly labeled by Project Insight as a potential threat to Hydra. In his young adulthood, he was already one of the top surgeons in New York City and was exclusively interviewed by WHiH World News about new life-saving techniques he had been investigating in his field. Strange eventually became attracted to Christine Palmer, a fellow surgeon who worked alongside him in the ER department of Metro-General Hospital. The two later began a relationship; one that did not last due to Strange's arrogance and his focus more on his career.

On a fateful night, Strange unexpectedly suffered a car accident that had resulted in his hands being crippled. When Western medicine failed to restore his hands into its original, functioning state, and was no longer able to continue as a surgeon, yet he refused to become an assistant or consultant. Instead of choosing to live a life with his now crippled hands, he squandered his money traveling the world and searching for a cure.

Meeting the Ancient One

One day in his peril struggling to recover, he heard a rumor of a mystical personage known as the Ancient One in Tibet, specifically located in Kamar Taj, in Kathmandu, Nepal. Marshaling the last of his inner and outer resources, Strange diligently searched until the fortress of the Ancient One was revealed to him. Strange embarked on a desperate journey that eventually led him to the Masters of the Mystic Arts as well as the discovery of magic and alternate dimensions, being trained by the Ancient One and Karl Mordo.

Though his focus was healing his hands, Strange instead learned more about the mystic arts, becoming a powerful sorcerer as moments go by, and soon helped the Masters prevent the rogue sorcerer Kaecilius and the Zealots from merging Earth with the Dark Dimension upon the hands of the powerful entity known as Dormammu, but not before witnessing the death of the Ancient One. Strange then became the hero simply called Doctor Strange, the protector of the Sanctum Sanctorum in New York City as well as Earth's protector from inter-dimensional threats, eventually earning him the mystic title of the "Sorcerer Supreme" of Earth by his later allies and foes after the Ancient One passed away during the battle against Kaecilius and the other, more powerful forces of Dormammu.

Ghost Rider and the Avengers

At some point in time, Dormammu was able to gain possession over Doctor Strange's body and tried to use him to commit crime and create chaos and take over the world. This plot eventually fails and Dormammu is driven out of Strange's body by the rest of the Masters of the Mystic Arts. Dormammu then retreats back to the Dark Dimension and tries to regain his might again. Dormammu, who wanted revenge, immediately ordered the Mindless Ones (one of those he sent was the transformed Kaecillius and the Zealots) to attack Earth. Mr. Fantastic had invented a device, which could've send the Mindless Ones back to their home dimension by channeling the energies of the heroes nearby. However, the device also allowed Dormammu's separated energies to be reabsorbed by Dormammu once again.

Dormammu, who was already regaining full strength, was interfered with by Strange again. With the aid of Avengers, Fantastic Four, and the Defenders, both Doctor Strange and Dormammu were both taken to an unknown land which is beyond the effect of time. Doctor Strange takes his chances and sends him and Spider-Man back into time and stopped Dormammu from seizing power ever again. Dormammu was defeated once again, but that doesn't stop him from ever continuing on his conquest invading Earth.

In the wake of the aftermath of several conflicts in superhuman history, including Dormammu's attempted invasion, a secret organization of heroes was eventually formed by Iron Man, Namor, Mr. Fantastic, Professor X, Black Bolt, and Strange himself. This organization was later known as the Illuminati, whose goal was to prevent such events from happening again, including the prevention of Dormammu and any other threatening cosmic beings' return on Earth.

Sorcerer Supreme of the Mystic Arts: Dr. Strange is the current Sorcerer Supreme of Earth; he possesses vast mastery of the mystic arts, which he uses to defend his reality from otherworldly threats; his primary magical patrons are a group of his fellow sorcerers known as "Masters of the Mystic Arts," a group founded by Agamotto and was formerly lead by the Ancient One before her death at the hands of Kaecilius. As a master sorcerer, Strange is able to mostly shape and manipulate Eldritch Magic as his basic source of powers, forming tangible constructs of energy such as weapons or shields, as well as cast spells by writing specific formations with the fiery energy.

Retrieved from "https://marvelcomicsfanon.fandom.com/wiki/Stephen_Strange_(Earth-61615)?oldid=235655"
Community content is available under CC-BY-SA unless otherwise noted.