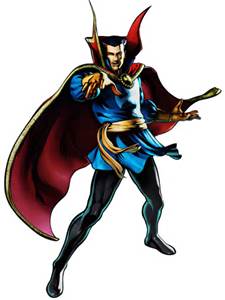 Black, with white at his temples
Status
Citizenship

Doctor Strange lived presumably the same life as his mainstream counterpart and assisted the Ultimate Alliance against the Mandarin and later by letting them use the Sanctum Sactorum as a temporary base of operations against Doctor Doom. He stayed with the team until Doom was defeated.

Doctor Strange assisted the Ultimate Alliance against the Skrulls during the Secret Invasion.

Equipment: Normally wears the Cloak of Levitation and the Eye of Agamotto. He possesses a wide array of arcane texts, artifacts, and relics.
Transportation: Quinjet
Weapons: When necessary, Dr. Strange will use magical weapons that he has collected.

Retrieved from "https://marvelcomicsfanon.fandom.com/wiki/Stephen_Strange_(Earth-6109.2)?oldid=206573"
Community content is available under CC-BY-SA unless otherwise noted.