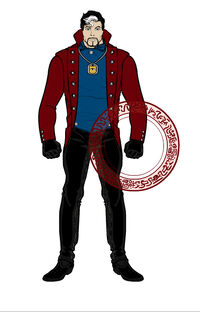 1. Personal Powers: As a result of his mystic training, Stephen is capable of a great many abilities, stemming from the innate resources of his body/mind/soul, such as:

2. Universal Sources: By manipulating the ambient mystical energy of the universe, along with local magical energy, Dr. Strange can perform a great many functions. Commonly this is seen as:

3. Divine Sources: Dr. Strange can channel energy from countless mystical beings in countless dimensions to empower his spells. This can take the form of standard spells ("Crimson Bands of Cyttorak") or just stating what he wants to occur and channeling some being to make it happen. It is unknown at this time what debt, if any, he incurs by invoking the powers that be. There is no strict quid pro quo (as the simple acknowledgement and invoking of the entity increases the entity's own powers, inexplicably), though some entities will feel he is obliged to heed their call when they need help in their conflicts as did the Vishanti.

4. Darkness of the Divine Conduit (Black Magic): By sheer force of will "take" the power of another entity. This does not require the use of a spell. He used this ability against Arioch and Shuma-Gorath. The fact that Stephen can do this is a testament to his incredible will-power and strength of mind. This is considered black magic and as such he rarely employs this. Also when taking the powers of celestial entities he absorbs the mind and assumes their duties and roles in the dimension in which they exist. If his will falters, he can lose all sense of self.

It has been said Strange's power is weaker against strictly science-based opponents, though this is illogical, as many times it has been stated magic is superior to science in the Marvel Universe. Strange also depends on spoken incantations, mystical gesturing, and his arcane artifacts in his duties; likely these can be counted as weaknesses.

Retrieved from "https://marvelcomicsfanon.fandom.com/wiki/Stephen_Strange_(Earth-515)?oldid=223408"
Community content is available under CC-BY-SA unless otherwise noted.