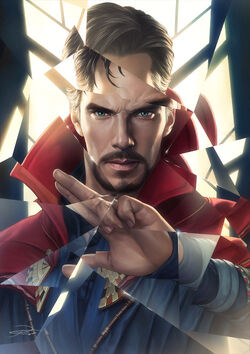 Stephen Strange was one of the world's most prominent emergency surgeons. He let the fame go to his head, which only inflated his ego and his arrogance. This made it hard for him to make friends and have relationships, which led him to turn to drugs. He soon became reliant on them to get through the day, and after a botched surgery that almost killed a patient, he went for a drive under the influence, and got in a crash that completely destroyed his hands.

No amount of surgeries proved successful enough to heal him, and he became deeply depressed. He began investigating any other possible way to heal himself, which led him to discover a place in Kathmandu called Kamar-Taj. Once there, he met a being called The Ancient One, who exposed Stephen to the world of sorcery. Initially, the Ancient One refused to teach him, but after constant begging, he relented.

Over time, Stephen came to master the mystic arts. The Ancient One and his second in command, Wong, were impressed with Stephen's natural aptitude for sorcery. Eventually, they were ambushed by the Ancient One's former apprentice, Baron Mordo, who had struck a bargain with the extradimensional demon Dormammu.

During the ensuing battle, the Ancient One was killed and a tear in the Dark Dimension began spreading into the physical world. Through this tear emerged Dormammu's rebellious daughter, Clea, who teamed up with Strange and Wong to repel Dormammu and Mordo and close off the tear.

The three of them then agreed to work together to protect the Earth from other-worldly threats. It was then that Wong revealed to Strange the true purpose of the Masters of the Mystic Arts is to protect the Eye of Agamotto, which houses the Time Stone. Completely willing to sacrifice himself should the need arise, Strange appoints himself the Stone's guardian, and finally feels he has found his purpose in life.

[[Category: In a Relationship with Clea Characters]]

Retrieved from "https://marvelcomicsfanon.fandom.com/wiki/Stephen_Strange_(Earth-101)?oldid=247201"
Community content is available under CC-BY-SA unless otherwise noted.