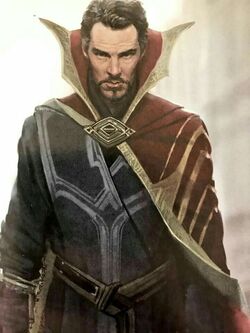 I'm not a god damn magician, alright? I was never even a sorcerer.

Stephen Strahan was one of the world's top emergency surgeons. He quite enjoyed being famous for saving lives. However, with fame comes torture. Strahan quickly became addicted to drugs, which resulted in a car crash that damaged the use of his hands. Stephen was forced out of his profession and fell into a deep depression.

He was eventually approached by Potts International, who offered to cure him. Desperate, Stephen accepted, and was put through the process of Terrigenesis. When he emerged, Stephen discovered he had the ability to move objects with his mind, open portals in space, and create energy constructs. The marketing team had a field day with this, concocting an identity of "The Sorcerer Supreme", calling him Doctor Strange and placing him on the Squadron Supreme.

For a time, Strange fought alongside the Squadron, but hated it. He felt like he wasn't saving people anymore. This feeling led him back to drugs, and he eventually had an epiphany that working for Potts was not right for him. Juniper Potts was livid to hear this, and tried to blackmail Strange, but he attacked her, resulting in a battle with other Squadron members Thunderstrike and Black Panther.

He was eventually able to open a portal and escape, arriving on Genosha and seeking out his former teammate, Bruce Banner, who left the Squadron for similar reasons. Through his friendship with Bruce, Stephen was able to kick his drug addiction and once more become a doctor for the people of Genosha.

Retrieved from "https://marvelcomicsfanon.fandom.com/wiki/Stephen_Strahan_(Earth-1515)?oldid=244626"
Community content is available under CC-BY-SA unless otherwise noted.