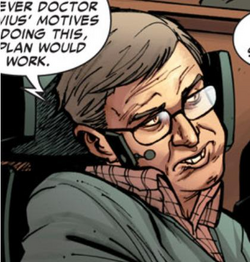 Professor Stephen Hawking was born on January 8, 1942, in Oxford, England. At an early age, Hawking showed a passion for science and the sky. At age 21, while studying cosmology at the Cambridge University, he was diagnosed with Amyotrophic Lateral Sclerosis.

Despite his debilitating illness, he has done ground-breaking work in physics and cosmology, and his several books have helped to make science accessible to everyone.

Paralyzed due to his Amyotrophic Lateral Sclerosis.

Retrieved from "https://marvelcomicsfanon.fandom.com/wiki/Stephen_Hawking_(Earth-1010)?oldid=133600"
Community content is available under CC-BY-SA unless otherwise noted.