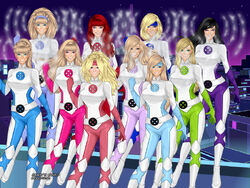 Stepford Cuckoos - Cloned daughters of X-Man Emma Frost. While Emma Frost was lying in a comatose state, Dr. John Sublime harvested eggs from her to begin experimentation. The Weapon Plus program began the cloning to develop a powerful weapon capable of killing every mutant on Earth by combining their telepathic abilities. The project was designated Weapon XIV and girls were incubated and artificially aged inside the subterranean level of The World. Thousands of girls were cloned from the ovum, but while the others remained dormant, five girls were sent to infiltrate the Xavier Institute as student sisters to hone their talents for Sublime's purpose. After the Xavier Institute went public, the orphan quintuplet sisters Sophie, Phoebe, Mindee, Celeste, and Esme were enrolled. To protect their secret origins, the girls unconsciously placed mental blocks in the minds of the faculty, preventing them from investigating their background.

Though both Esme and Sophie has since passed away Celeste, Mindee and Phoebe were introduced to Stephanie, Katherine and Zoey their identical sisters and became the new six-in-one. They also informed Desert Ghost about Sublime’s evil purposes and the X-Men took him on. They were soon joined by Alexandra and Yasmine Cuckoo making them eight-in-one. That soon change with the addition of Lauren and Kimberly the tomboys of the sibling team they are now 10 in one.

The Stepford Cuckoos are mutants with psychically based powers similar to their biological mother, Emma Frost. The girls have demonstrated the following powers:

Telepathic Hive Mind: The Stepford Cuckoos have a linked hive mind, which allows them to share thoughts and maintain a continuous telepathic connection. The link is strongest when the girls are in close physical proximity. Their collective mind also allows for increased telepathic strength and shared intellect. The girls' powers are greater the sum of its parts. A stronger personality can take lead of the hive mind, but the girls still maintain their independence.

Telepathy: The Cuckoos can read minds and project their thoughts to others. Though they individually possess their own telepathy, but their telepathic abilities are greater when the girls join together. The girls have stated that together they can block even very talented telepaths from reading their minds.

Telepathic Illusion: The Cuckoos can create realistic psychic illusions and cause people to experience events which are not actually occurring.

Mind Alteration: The Cuckoos are able to alter the minds of others by force of will. This can be restoring memories or transferring knowledge.

Telepathic Tracking: The Cuckoos' psionic senses enable them to detect and track other sentient beings by their unique psionic emanations or thought patterns. This ability is highly sensitive to proximity, but can be enhanced with the use of Cerebra.

Astral Projection: The Cuckoos are capable of sending astral projections, astral travel, and communicating with others astrally through their own will, or through contact with the thoughts and memories of others.

Mental Paralysis: The Cuckoos are able to effect certain areas of the brain to induce temporary mental or physical paralysis.

Mental Amnesia: The Cuckoos can erase any awareness of particular memories or cause total amnesia. They can also restore memories.

Mental Triangulation: Due to their hive mind, the Cuckoos have the perspective of three directions and are able to triangulate on individuals' minds.

Flawless Organic Diamond Form: Like their biological mother, the Cuckoos have the ability to transform themselves into a flexible, translucent, organic diamond-like substance while retaining mobility. In this form, their skin is as hard as real diamond. In this state, food and water are not needed for a undetermined amount of time. Their diamond form does not require a conscious hold and thus will remain until it is voluntarily triggered back. Unlike Emma Frost, their diamond forms are completely flawless. Nothing can enter or escape from their core. However, maintaining this form for extended period of time reduces their emotional capabilities.

Telepathic Immunity: While enclosed in diamond skin, the girls are immune to telepathy, but also cannot access their own telepathic powers.

Superhuman Stamina: Their diamond form grants the ability to sustain peak exertion for up to a day.

Superhuman Durability: Their diamond form augments their skin, bone, and muscle to become stronger and harder than human. They're completely impervious in their diamond form.

Compartmental Diamond Transformation: Unlike Emma, the Cuckoos can selectively transform discrete parts of their bodies. Once, to trap the Phoenix Force fragments, the girls transformed their hearts into a flawless diamond prison.

Retrieved from "https://marvelcomicsfanon.fandom.com/wiki/Stepford_Cuckoos_(Earth-9901)?oldid=215220"
Community content is available under CC-BY-SA unless otherwise noted.