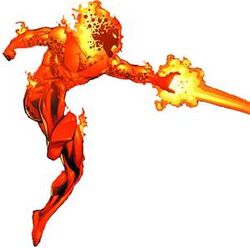 Little is known about Starbolt's life before Deathbird's coup d'tat against her sister, Lilandra. It can be assumed to be similar to his mainstream counterpart.

Starbolt was one of the Imperial Gaurdsmen that aided Deathbird in taking the throne. He was one of the guard ordered to guard the forcefield generator on the ship transporting Lilandra with Warstar. He was most likely imprisoned after Lilandra regained power thanks to the Alliance.

His body is composed of an unknown form of energy that resembles fire. He has the ability to fire bolts of energy from his hands.

Retrieved from "https://marvelcomicsfanon.fandom.com/wiki/Starbolt_(Earth-6109.2)?oldid=156807"
Community content is available under CC-BY-SA unless otherwise noted.