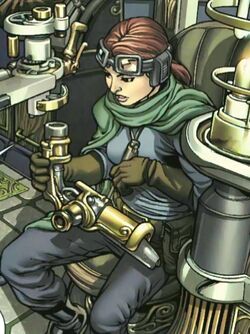 The Travellers (with her spouse)
Identity

The X-Men, the Avengers, the Fantastic bloody Four...their kind dominated every era, ensuring that people like us never challenged the mundane status quo. Believe me, a world filled with fifty-year-old men punching one another is no place for children. The next generation deserves something new...and that's exactly what we're going to give them.

Stacey Yorkes' origin is the same as that of her Earth-616's counterpart.

Retrieved from "https://marvelcomicsfanon.fandom.com/wiki/Stacey_Yorkes_(Earth-1010)?oldid=220678"
Community content is available under CC-BY-SA unless otherwise noted.