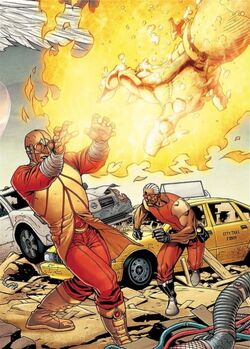 St. John Allerdyce was born in Sydney, Australia. Although named St. John (pronounced Sinjin), he preferred the name John or Joe. As he got older he learned he could manipulate and control fire, but was unable to create it. Little is known about his past life other than he was a writer and spent most of his time in South East Asia working as a journalist and later attempted a career as an author of Gothic novels.

At one point in his young life, he befriended a fellow older mutant named Hank McCoy, whom he met while they were on a book conference in Oxford, England. For a short amount of time, Hank also became John's mentor in his literary works, giving him several advice and teachings on writing his novels. From time to time, John started to get afraid of humanity itself, after one time he used his powers in order to save someone from a bunch of thugs. Instead of thanking John, the civilian got scared, called him a "freak," and ran away towards a police officer he saw, who was near outside a bar. The police officer charges towards John and points his gun at him, telling him to freeze and calls for backup.

John, who was scared, had no choice but to create a cloud of smoke by the fire he was producing so he can get out from the police in time before the rest of the cops could've arrive at the scene. While the scene was happening, a man wearing a hooded coat was watching him from afar, who seemed to be interested and was amazed in what he can do.

Still a fugitive, John was walking in a snowy forest during winter when he met the mutant who reveals herself to as Mystique, who learned of his mutant powers. As a result, John joined her to Magneto's Brotherhood of Mutants under the titular name of Pyro. From time to time, John became one of the oldest and the most loyal members of the Brotherhood. Unlike most of his teammates who had severely hated the X-Men, John still had some respect for their long-time archenemies, especially for his old friend Beast, who still has respected each other, despite their ideological disagreements.

Following the events caused by Mister Sinister that changed the world forever, Pyro was one of the Brotherhood's members who first questioned Essex's true objectives in joining the Brotherhood in the first place. After revealing Essex's true plans for the entire Brotherhood and to the mutantkind, Pyro and several others remained loyal to Magneto which immediately disappointed Sinister, since he had seen a lot of potential in John and others in using their powers. Pyro and his other allies fought against Sinister and the traitors but shortly ended after they managed to escape the fortress and the island of Genosha.

With Sinister gone out on the lose, the Brotherhood had no other choice but to ask for Charles Xavier and the X-Men's help to find and stop them from releasing the mutant-killer virus known as the Legacy Virus into the water supply to prevent millions and billions of lives from being taken. Pyro and Mystique was sent to the X-Mansion to inform Xavier about Sinister and asked him for their help. Although the other members of the X-Men wasn't truly convinced by their plead and still didn't trust them, Xavier and Jean Grey entered both John and Raven's mind and saw the horrors that have happened during the first days of the so-called "The Movement," dubbed by Sinister himself. The X-Men finally was convinced and believed them, though they still have yet to fully trust the Brotherhood not until later when Magneto's Brotherhood became more and more sincere into helping for the sake of mutantkind's safety.

During the final battle, Pyro uses all of his efforts to finally destroy the last Sentinels and defeat Mister Sinister, burning him. Sinister seems to be weakened and dying after getting burned by Pyro, but because of his accelerated regenerative healing factor, he easily grabs John and manages absorbs everything from John's body, including his powers and abilities including his life-force, slowly killing him. His body was eventually found among other fallen heroes by the Ultimates, specifically the X-Men. His body was later taken by the X-Men due to Magneto's request that he deserved a proper burial, since he died a selfless hero who still had a good heart inside him that caused him to become a hero at such a young age.

Because of his heroic sacrifice, John was buried along with the former X-Man, Archangel and other fallen mutants who also died during Ultimate War at Xavier's School for Gifted Youngsters, making them an inspiration to several mutants to join the X-Men to honor his their memories. John's novels were eventually discovered by Beast, Professor X, and Emma Frost who were amazed and were greatly impressed by his written works. Because of this, Hank decided to finished the unfinished works of his old friend in order to "keep his flame burning," continuing his legacy that he left for them.

Homo Superior Physiology: Pyro is a mutant who can generate and harness fire. Pyro was a mutant with the psionic ability to cause any fire, however small, to grow in size and intensity and to take any form that he desired, even that of a living creature. He could then psionically cause that creature of "living flame" to do anything he wished.Once having established control over a fire, he could continue to control it after it had left his range of sight, but only with a degree of difficulty that increased as the distance between himself and the flame-being increased.

Retrieved from "https://marvelcomicsfanon.fandom.com/wiki/St._John_Allerdyce_(Earth-61615)?oldid=265672"
Community content is available under CC-BY-SA unless otherwise noted.