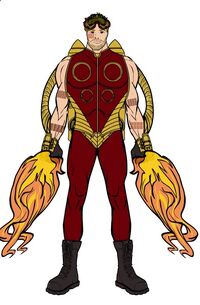 Pyro was an accomplished journalist and novelist.

Equipment: Pyro also wore a specially insulated costume that afforded him a certain degree of protection against fires he did not control.
Transportation: None known.
Weapons: Pyro wore a kerosene-based flame-thrower on his back that could generate a stream of flame of up to 25 feet away.

Retrieved from "https://marvelcomicsfanon.fandom.com/wiki/St._John_Allerdyce_(Earth-515)?oldid=256353"
Community content is available under CC-BY-SA unless otherwise noted.