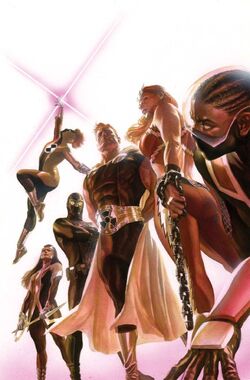 The Squadron Supreme was originally formed when the U.S. Government recruited both current and new superhumans to carry out missions on its behalf, under the jurisdiction of the national military's General Dennis Scrump. While some of the team's missions are international in scope and have a "positive public relations" aspect (even in the entertainment industry), others are covert and apparently involve military strikes and assassinations, an exclusive feature of the program that even most members would start despise due to the governments' continuous extreme and inhumane way of handling crime and danger, questioning Scrump's authority in the process.

With the help of information and convincing from a vigilante named Nighthawk, it only took the Squadron almost a couple of weeks to figure out that Scrump, along with other superiors of the government, has been unknowingly manipulated by a telepathic terrorist known as the Overmind, effectively convincing the U.S. Government to retain his power over the Squadron Supreme since the latter was activated. With Nighthawk finally helping the founding members of the Squadron, albeit still in secret, they finally set their move to find and take down the Overmind to free the coerced ones from his diabolical orders before it's too late, since Hyperion believes that Overmind would eventually brainwash the entire world into following him for the rest of their lives.

After several hours of investigation and confrontations against the coerced ones whom they had interrogated, the Squadron was able to tail the hidden base of the Overmind, where they found out that the villain had already activated a machine which the government had previously stored that could enhance his telepathy into "technopathy" and be able to use all electronics all over the world to control the minds of every single soul on Earth who uses an electronic device. Overmind did activate the machine, proving his plan to be a success to an extent, with his tech being able to force most of the Squadron to his submission, only to see that two members of the Squadron had willpower on their side: Nighthawk and Thundra. Despite having to reluctantly face their powerful allies, the two were able to destroy the machine for good and beat down Overmind into unconsciousness, reverting before Hyperion and the rest before they could have killed them and caused any more devastating blow across Squadron City.

With the defeat of Overmind, the Squadron had thought they truly won the battle, until they also discovered that Overmind has been long dead, with Doctor Spectrum's Power Prism detecting that his corpse was being controlled by something implanted on his spine, something that they later found out was being controlled by someone else. A few more investigations later, Nighthawk eventually figured out that the main mastermind was indeed General Scrump all along, and using his advanced tech to duplicate the once decrypted files Scrump and his secret council has been hiding for decades, before exposing it the public and the authorities, revealing the General's true colors and intentions once and for all. By the moment Nighthawk informed the Squadron of his findings, they once again banded up to help the authorities defeat and arrest Scrump and his group. And with the defeat of Scrump, they decided to finally their existence and identity to the public, with the U.S. Government ultimately declaring them as an independent super-heroic organization during a later public press conference in Rocket Central, as an act of gratitude after the Squadron had saved the entire world from Scrump's secret agenda.

For the very first time, the now publicized team has officially comprised the immigrated Eternal Hyperion, the "Amazonian" sisters Warrior Woman & Thundra, the speedster The Blur, the space-enforcer Doctor Spectrum, and their newest member, the secretive vigilante but beloved hero Nighthawk. Just as the superheroes' never-ending journey continues from time to time throughout the next five to seven years, more and more threats have sensed their presence at the same time besides enemies of the state, including the likes of the Shi'ar Emperor Vulcan, the infamously traumatizing clown-disguised entity known as Pennywise, the secretly-unhinged Canadian Republic-sponsored organization called the Alpha Flight, and the evil organization which oppositely mirrors the heroes' deeds, calling themselves as the Squadron Sinister.

For a full decade, the Squadron Supreme has mainly served as the Earth's first line of defense against terrestrial, extra-terrestrial, inter-dimensional and supernatural threats. There have been many members over the years and several incarnations of the team, but sadly the first roster of heroes that was the original six would eventually meet their fate on an unexpected day in the form of the mysterious mad scientist named Thomas Lightner, who mutated himself and subsequently gave him the "powers" of a black hole.

As a panicked response to Thomas' worsening condition on causing chaos and destruction throughout Atomic City, the United States Government had no other choice but to call for an outside help since their forces couldn't deal with the growing threat, leading them to contact the Squadron Supreme. The Squadron couldn't immediately stop him during their confrontation due of his vast astral cosmic powers which rendered Lightner as one of the most unstoppable adversaries the Squadron has ever faced.

In an act of a desperation to prevent Lightner's devastating unstable powers from destroying Atomic City, and possibly even the Earth itself, Hyperion flew Lightner out of the planet towards the depths of space. As the main energy of the Sun was finally being absorbed into his body, the process (that causes the Sun to turn gradually turn dark since the star's light being slowly absorbed) accidentally releases a large of solar flare heading directly to Earth, Hyperion could only stare in horror since he couldn't do anything else but be pressured to choose between the decision of stopping a powerful Thomas and preventing the solar flare from destroying the entire planet's atmosphere.

In the aftermath of Lightner's actions as Mysterium has actually put a massive and significant scar on Atomic City, the last battleground he had stood on Earth against the heroic Squadron Supreme. Mostly blamed for the tragedy by the biased media and the conflicted public, the Squadron were heavily stricken with guilt, with some of them even would eventually experience major cases of depression, due to massive loss of civilian lives in the well-beloved city, forcing themselves to disband, going their separate ways to deal with the heartbreaking grief and the acceptance of the fact that they've failed to instill hope and trust to the people across the world, one last time.

Retrieved from "https://marvelcomicsfanon.fandom.com/wiki/Squadron_Supreme_(Earth-61712)?oldid=252615"
Community content is available under CC-BY-SA unless otherwise noted.