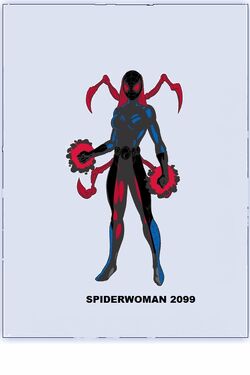 Ester Fassbinder was born in Hannover, Germany to the Fassbinder family. Her father was a german cop former GSG 9 and her mother is the daughter of Jessica Drew. Growing up her mother wanted her to pursued an acting career but even though she took the classes, she also trained to become a cop. She became a member of German counter-terrorism and special operations unit, commonly abbreviated GSG 9. Her spider powers she got from her grandmother started to appear slowly, superhuman strength, speed, stamina, durability, agility, reflexes, flexibility and hearing. At first she didn't notice because she just thought it was her GSG 9 training kicking in.

The mission was to take out a group of terrorists hiding in the city of Bremen in the warehouse district. Ester and her team were ready to go in, the entire unit is ambushed and executed by a group of armed women except for Ester. They wanted her alive for some reason. One removes her mask and reveals her face, she is one the higher ups at German Counter-Terrorism and that she been watching Ester for sometime waiting to see if she would gain spider powers. Ester ask "Who are you really?" The woman replies, "We are the Sisterhood of the Wasp and you won't be able to use your superhuman strength to free yourself for those ropes, we gas you with Ethyl Chloride." Before they could take her anywhere, men and women in armor wearing the mark of the spider broken in and started fighting the Sisterhood of the Wasp. One of these people freed Ester and gave her the counter agent to the Ethyl Chloride. The Wasp members escaped do to the size numbers and skill of their enemy. Ester later learn they were called the Spider Society .

Ester becomes a hero called Spinne-Frau which is German for Spiderwoman. She joins the Spider Society in fighting the Sisters of the Wasp. On one of these missions she went to America to secretly help out a new hero name Spider-Man. She went to work for Public Eye as Zandra, the Public Eye headquarters receptionist. When Doom conquered America she left.

The Gathering of Five

Ester learns of arcane ritual with five arcane relics, where the people are granted either immense power or they pay the ultimate price. These relics, when brought together and the ritual performed, allow the five who posses them to be blessed or cursed with: power, knowledge, immortality, insanity and death. She and a member of the Spider Society, named Wes Tannis.

Spider-Woman possesses several superhuman powers inherited from her grandmother, after the Gathering of Five ceremony, she received the powers of all the previous Spider-Women and Madame Web, that granted her spider-like abilities:

Skilled Martial Artist: is a highly experienced fighter trained in armed and unarmed combat by GSG 9. Although skilled as a martial artist, her tactics integrate different methods utilized in Karate, Boxing, Capoeira, Judo and swordfighting. Even without her powers she made a powerful opponent.

Master of Disguise: She went undercover has an American receptionist named Zandra at the Public Eye headquarters for years.

Multilingual: Due to her espionage training, she is fluent in several languages, including Russian, Japanese, French, Spanish, Portuguese, Korean and German.

Retrieved from "https://marvelcomicsfanon.fandom.com/wiki/Spider-Woman_2099_(Earth-928.2)?oldid=255875"
Community content is available under CC-BY-SA unless otherwise noted.