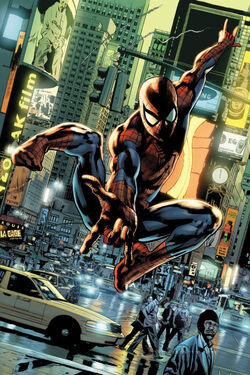 Single
Occupation
Adventurer, vigilante, teacher, member of the Iron Avengers
Education
Implanted with some of Spider-Man's memories and knowledge; self-absorbed knowledge
Origin
Origin
A near-perfect copy of Spider-Man made by Kang
Place of Birth
Damocles Base
Creators

And they say I don't have his charm. At least I kick twice more asses than him!

The Spider-Man Robot otherwise dubbed by its creator the Timespinner is one of Kang's earliest product of his quest against the Avengers. It was built to defeat the Avengers and the robot performed its duty well until the true Spider-Man came along and destroyed him. The automaton was almost forgotten until Ezekiel Stane discovered its whereabouts and had it upgraded it. His usage was brief, but he eventually found his own freedom with three fellow machines with whom he founds the Iron Avengers.

The Timespinner possesses the same exact powers as the past's Spider-Man without any of his weaknesses. This also means that he is without any of his duplicate's newer powers, but that doesn't make him helpless. He is armed with his own Spider-Sense that warns him of danger from all sources. This is because Kang intended him to match the Avengers, substantially enhancing his spatial awareness and speed over the original Spider-Man. His Spider-Sense is able to detect incoming magical attacks and even sense the presence of symbiotes.

Not only does he move fast, but he also thinks fast. Timespinner's machine brain has the thinking capacity of a 40th Century supercomputer. His creator has advanced past such level of tech but the robot's probability-measuring capability is nothing to be underestimated. He can run large numbers of calculations and accurately depict the results all within the span of milliseconds. From everything that he sees or knows, he can even conclude possible alternate futures and in his case, predict events that have already happened outside his memory box with utter precision.

Timespinner can activate a unique stealth mode that renders his entire body invisible even to radar detection, akin to those of the Invisible Woman's. While invisible, his scent and movement sound are also dampened so only those with the most acute of superhuman hearing can hear him in such mode.

Timespinner has the same abilities as his template. He is an amazing acrobat and scientist. His processor is already implanted with knowledge from Kang's future timeline which means he is possibly smarter than Peter himself. Timespinner is a competent fighter as he completely replicates his original's fighting style. Journalism is also well in his field and so are most of the things Parker can accomplish.

Timespinner was designed to be as strong as the past Spider-Man, which means he has the strength rating of Class 10.

Timespinner is far weaker than the current Spider-Man since Parker has been trained, mutated, and enhanced in many ways since their last encounter. Aside from that, the robot is lucky to not have other weaknesses. EMP and electricity are harmless to him courtesy to Kang's construction and he is immune to his webs' own effects. Hacking him is virtually impossible since his 40th Century firewall lets none but the smartest of hackers to pass.

Equipment: Web-shooters and one of Spider-Man's uniform.
Transportation: Web-swinging and Carrier-Zero.
Weapons:

Retrieved from "https://marvelcomicsfanon.fandom.com/wiki/Spider-Man_(Robot)_(Earth-5005)?oldid=242250"
Community content is available under CC-BY-SA unless otherwise noted.