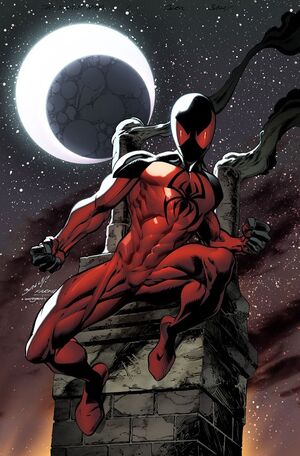 Marvel: The New 52
Base Of Operations
Horizon Labs
Characteristics
Gender

Jason grew up admiring Spider-Man but his father despised him saying Doctors and Police are real heroes. Jason's Father once burned all of his Spider-Man memorabilia as Jason watched helpless.

When Jason was 16 his school was attacked by The Rhino when Spider-Man came in to stop him but was knocked out. The school was evacuated after the science lab blew up and set a fire though Jason had acquired enough Spiders Webbing to place into his own Web Shooters. Jason placed a Ski Mask on himself and managed to stick The Rhino onto a wall long enough for him to drag Spider-Man out of the school. Jason then took Spider-Man to Horizon Labs where he unmasked himself to be Peter Parker.

Jason and Peter created Equipment for Spider-Man to use a range of things like Web Grenades,Web Shooters and other things. After they were done Peter injected Jason with a serum that was equal to the venom in the spider that bit him all those years ago. Jason collapsed and woke up with a note that said Your the New Spider-Man and a arrow pointing to the left. Jason looked over there and saw a Spider-Man suit pinned on the wall.

Science Major: He is a brilliant individual, with exceptional skill in practically every field of science, and is an excellent inventor. He is an accomplished chemist and physicist. Skilled Photographer: Jason is a very skilled photographer.

Transportation: Spider-Man's main form of transportation is "web slinging" with the aid of his spider-webs. Spider-Man was able to keep pace with Captain Marvel at his best speed, surprising the Kree warrior, although Spidey mentioned it was mostly due to his practice with web slinging over his career.
Weapons: None known.

Jason learnt everything from Peter Parker

Retrieved from "https://marvelcomicsfanon.fandom.com/wiki/Spider-Man_(New_52)?oldid=255870"
Community content is available under CC-BY-SA unless otherwise noted.