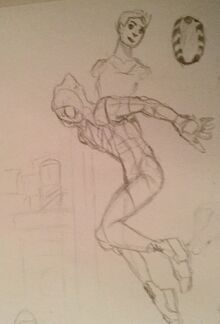 American
Occupation
Freelance Photographer
Origin
Origin
A genetically enhanced spider bit him. Either that or some mystic voodoo hood being possessed the spider that bit him.
Place of Birth
Mt. Sinai Medical Center
First appearance
Unknown

Peter Parker was born in 1991 to a Jewish family. In 1993 his parents died in a lab accident, destroying the Oscorp facility they worked in. His aunt May and uncle Ben took custody over him. At the age of 14 he began sneaking out to the ruins of the facility, believing there was more to his parents death (much to the dismay of his family).

During High School he went through loneliness, enhanced by bullying from his former friend Flash Thompson. He later began friendships with Gwen Stacy and Harry Osborne. While continuing to search for something on his parents death he found odd devices, which he proceeded to test out discovering they launched a string like substance that could sustain 3 times his weight. While experimenting with the devices a spider with the number 42 landed on his neck and bit him. When back home on a train he fell asleep. When he awoke he found a man trying to balance a beer bottle on his head, in fright he jumped up finding and attaching to the wall, when he got down he unintentionally tore some flesh off the man's face, when the man tried to attack him he found that he could sense it, he dodged it and knocked him unconscious through reflex.

Frightened, he left at the first stop and researched spider bite symptoms subsequently finding nothing. He hid in an abandoned warehouse and tested his abilities there. While there he came to the conclusion that he could use his new found abilities could help with his money problems. While at school he used what he could find to create an outfit including: Spandex, reflective lenses, and flip flops.

He entered an underground wrestling ring under the name :The Spider. After a bout against the reigning champion Bonesaw he was awarded $500. A thief stole the rest of the money which he refused to stop stating, "Not my policy bud!" He then went on his way home.

On his way home he heard a gunshot, he went to see what had happened and there lay his Uncle Ben. Full of rage he chased the man down to a warehouse where he discovered it was the man he let escape, he then began torturing him, during this the man fell out of a window, he quickly used the devices (Which he had taken to calling web shooters) to keep him form falling to his death. He decided there was no point to killing him. Filled with guilt, remorse and rage he remembered what his uncle told him growing up, "With great power, there must also come great responsibility. He then decided to become a vigilante to use his powers responsibly.

Using the prize money he bought an aerodynamic racing ski suit with impact pads, a paintball mask, a tac backpack, some golf gloves, and a few can of red spray paint. He faced the problem of lack of money, with his aunt being too weak to continue her job as a nurse, he began the ever imposing challenge of job hunting. Unfortunately finding a job was seemingly impossible and with growing debts he was unable to pay things were looking bleak. After finding an ad wanting photos of Spider-Man he began selling photos of himself to The Daily Bugle.

Spidey in his new suit quickly began fighting criminals gaining infamy while also selling pics of his exploits to the Daily Bugle in order to afford repairs to his suit. He soon found himself attacked by 2 mercenaries: The Rhino and Vulture. He quickly managed to exploit their suit's design flaws by destroying Vulture's engine and Rhino's cooling system or lack thereof. During this time he began dating Gwen Stacy, while Aunt May tried to introduce him to Mary Jane.

He soon tried to stop a robbery at Roxxon Corporation, where he again encountered Rhino and Vulture. The battle took much longer, he was wounded by Rhino, he then caused Vulture to fire upon some explosive chemicals that Rhino was nearby, subsequently knocking him unconscious. He then made quick work of Vulture.

He was soon attacked by the mercenary known as The Beetle. After a long battle Spider was defeated and left in a dumpster. He woke up to an odd frequency which he followed discovering a robbery. He chased the robber down, and did battle with him, it ended in a draw and the man left him with his name in respect: Prowler.

Soon a green Goblin like creature attacked Times Square Peter came in to stop him and instead was badly wounded. Captain Stacy had also come into conflict with the Goblin although his leg was broken by his foe driving Spidey into a rage. After a heated and bloody battle he defeated Goblin who barely escaped with his life as Spidey needed to save some civilians reminded once again that with great power comes great responsibility. It wasn't long before the mercenary Deadpool hunted Spidey down (not to mention nearly defeated him) although he was suddenly shot by a bolt of energy and apprehended by a group of government officials.

•Can lift 8 times his weight 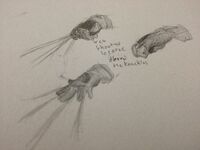 •He looks up to the comic character Oracle

Retrieved from "https://marvelcomicsfanon.fandom.com/wiki/Spider-Man_(Earth-1065)?oldid=99218"
Community content is available under CC-BY-SA unless otherwise noted.