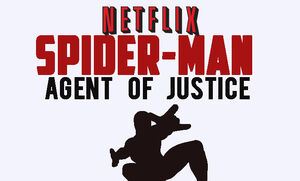 Spider-Man: Agent Of Justice is an American animated television show, developed by Netflix Kids, and is only available in that platform. It is created by DuttPanda.

1. Kill Bill Volume One: When Spider-Man exposes Wilson Fisk`s colombian drug cartels to the military and gets arrested, Fisk confidentially arranges a protocol, and sends assassins; Bullseye, Gladiator and Typhoid Mary who are given a contract and a lot of ca to go against the hero. Spider-Man must attend to the three assasins; while being secretly monitored by S.H.I.E.L.D.

2. Kill Bill Volume Two: Spider-Man is aided by three allies; Iron Man, Black Widow and Luke Cage to fight against the three assassins who cause havoc and rampage within the corners of Hell`s Street. After the four heroes defeat the three villians, Spider-Man`s abilities are tested by Nick Fury, and is recruited as an agent of S.H.I.E.L.D, starting the beginning of the series.

Villians: The Inferno Three, The Vision.

3. Blind Justice: Spider-Man is sent on a dual mission with Daredevil; to infiltrate a Russian Mob Database led by Sergei Kravinoff, but the differences of the two heroes cause dangers to arouse, however, it is up to their sleeves, to save the day.

5. Sibling Rivalry: In this exciting episode, Peter Parker is told that he will work alongside his sister, tantalized and unaware he has a sister, Peter works alongside the professional and master combatant and expert marksman Teresa Parker aka Fatale and work together to prohibit a hijacking on the cruise ship; the Titanic MMRSII, while they both investigate their pasts.

6. The American Way:  After Peter Parker is promoted to Level Two of S.H.I.E.L.D, as a reward, he is congregated to Captain America, and is given a mission alongside him to prohibit the Latverian fugitive Victor Von Doom (who had been recently given a government immunity for all of his actions) from unleashing a portal that will send out an army of Chitaurians attacking New York. In spite of their differences, the rookie agent and the American hero work their way out of the massacre and once again, save the day.

7. Suicide Mission: In this hilarious episode, Nick Fury recruits Tony Stark and Peter Parker to go on a suicide mission; to anyhow authorize Nick Fury`s divorce with his Kree wife! When Tony Stark and Peter Parker accept this mission only because of recreation; they realize that it was not a personal mission; but was literally a suicide mission! In secret, Nick Fury`s new Kree wife was summoning an army of Kree Demons to invade Earth!

8. Another One Bites The Dust...: After Peter Parker fails to complete a mission to prohibit the criminal, the Prowler to destroy a metropolian train station, Peter is assigned to complete an amateur job; to be a bodyguard of soccer player; Luis Suarez (infamous for biting his enemies midst matches) to stop any threat from coming in! Although confused at first why he was given a mission where there were no threats; he realized that some very spooky connections with the soccer play may bring in deep trouble in the stadium of the World Cup Finals of the Urugians and the Germans!

9. Day In Night: When Malekith, a Dark Elf, plunges Earth into an unambiguous form of darkness, revoking any system of light in Earth, the Guardians of the Galaxy use a portal to transmit the nearest possible hero to their spaceship via a S.H.I.E.L.D interstellar communication portal. Spider-Man is mysteriously sent into the GOTG Base and together, the Guardians and Spidey travel to Jotunheim to exterminate the Dark Elves Army and obtain the mystical IS0-8.7, the omnilux object, to bring back the light of Earth.

Retrieved from "https://marvelcomicsfanon.fandom.com/wiki/Spider-Man:_Agent_Of_Justice?oldid=112417"
Community content is available under CC-BY-SA unless otherwise noted.