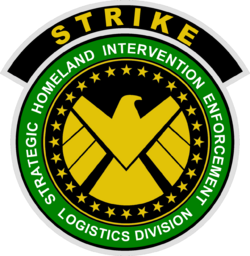 The Special Tactical Reserve for International Key Emergencies, or S.T.R.I.K.E., was S.H.I.E.L.D.'s counter-terrorism team headed up by Captain America. The team was sent on a mission to rescue hostages from a S.H.I.E.L.D ship, the Lemurian Star, which had been hijacked by the mercenary Georges Batroc and his band of pirates. S.T.R.I.K.E. fought the pirates and rescued the hostages, but with some difficulty when Agent Romanoff abandoned her part in the mission to pursue a mission of her own. Her mission to retrieve restricted data from the ship allowed Batroc the opportunity to escape.

Members of S.T.R.I.K.E., and other agents, later attacked Captain America in one of the lifts in the Triskelion, on the orders of Alexander Pierce. They were soundly defeated however, and Rogers made his escape. After this failure they were tasked with finding and capturing the fugitive, who had gone on the run in the company of Agent Romanoff. Their first attempt failed when the pair eluded them at a shopping mall, and they missed a second chance when Rogers and Romanoff escaped a missile strike at Camp Lehigh. This prompted Agent Rumlow to call in the "asset," a Hydra operative known as the Winter Soldier.

S.T.R.I.K.E. and the Winter Soldier attacked Rogers, Romanoff and their new ally Sam Wilson on a highway while they were transporting Jasper Sitwell. The Winter Soldier's capabilities won out over those of the fugitives, allowing S.T.R.I.K.E. to finally captured them. However, while they were transporting their captives to a secure location, the three heroes were rescued by Maria Hill, an act that went unnoticed until S.T.R.I.K.E. reached their destination.