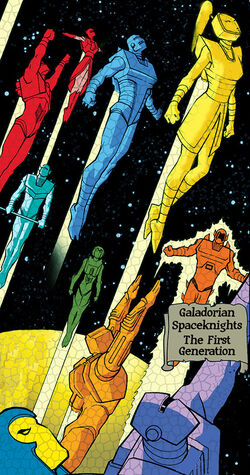 The Spaceknights are Galador's first and last line of defense against threats beyond their military's powers. Consisting of men and women who sacrificed their humanity, the Spaceknights are known to be one of the greatest elite forces in the universe. They've served Galador from the Wraith Wars to this day.

Although their armor was developed before the Wraith Wars, Spaceknights themselves did not surface until the realization of Galador's possible annihilation by the wraiths. The earliest version of the Spaceknight Program was known as Project: Gold Knights. The project aimed to create a number of powerful super-soldiers (akin to the USA's Super-Soldier Serum) capable of performing a multitude of combat tasks.

It did fail, but in a good way. The participants survived the project, and the only known failure was that the project itself didn't provide the Galadorians with an adequate type of soldier. Since the Dire Wraiths were very strong, organic and unarmored soldiers unsupported by good armor even with their superhuman durability. With that in mind, the Spaceknight Program was finally born.

After several tests upon non-sentient beings which admittedly produced super-powered animals, the Spaceknight Program was kicked into high gear alongside their armors' development. Participants would be put in the Spaceknight Procedure first to link/sync them into the armor systems while also providing them with the bionic enhancements of its predecessor. As a result, the new Spaceknights became powerful beings capable of superhuman feats. However, it had unwanted consequences and they were tragic.

Subjects described that they couldn't smell anything and they failed to feel the sensation of someone touching them. Attempts of feeding them also failed, with the knights suddenly having no interests to eat or drink whatsoever. Even if they ate, nothing came out of their anuses. Unfortunately, their pain receptors are still well although they can't feel other things.

Left in a miserable state, the Knights lost some of their humanity, with several considering that it's their entire mortality. Left with no choice, they were put into their armors for their first test; a trial by fire.

Deployed into a front where the Galadorians were steadily losing ground, the troops did not trust them due to their desperation and lack of hope since the battlefield had been littered with corpses of their comrades. However, the Spaceknights did not disappoint and their first trial was successful due to the valiant effort of one Spaceknight. To this day, the identity of this Spaceknight is unknown.

Afterwards, more and more volunteers would enter the Spaceknight Program, one that also included the legendary Rom. The First Generation Spaceknights would be the most famous ones in the unit's history thanks to the acts of not just Artour but others such as Firefall and Starshine.

Around this time, the Spaceknight Raak, the Breaker founded the black-ops arm of the Spaceknights, the Disavowed. The Disavowed would later play a part in Rom's rise to prominence as they discovered an impending Dire Wraith campaign soon, warning Rom's station of the threat. Unfortunately, they're largely ignored in such event.

Years after Rom's brave act in repelling a Dire Wraith offensive and his mission on Earth to drive away the maleficent Doctor Dredd, the Galadorians finally launched one final assault on the Wraiths' homeworld of Wraithworld. Alongside their mortal counterparts, the Spaceknights attacked the planet in their full force. Although casualties among them were high, they were finally victorious thanks to Rom and his wife.

After the events of Wraithworld, the Spaceknight Program still goes strong and newer developments are done. Aside from introducing Second and Third Generation Spaceknights, improvements were made to surviving Knights from the previous generation. Until now, they still fight for Galador alongside their allies and special counterparts.

Equipment: Spaceknight Armor.
Transportation: Their own armors or various advanced spaceships.
Weapons: Each Spaceknights' own weapons.

Retrieved from "https://marvelcomicsfanon.fandom.com/wiki/Spaceknights_(Galadorian)_(Earth-5000)?oldid=213754"
Community content is available under CC-BY-SA unless otherwise noted.