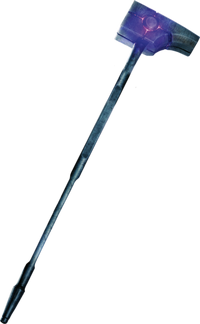 Vodar Odison forged Soul's Eye after he found his father's forgotten vault on Midgard. Where he found battle hammers. Vodar scanned and created his own hammer. Opon the creation of the hammer he placed the Soul Stone, Warlocks Eye,and Casket of Ancient Winters. Once it was made Vodar used it to track down a man with a bounty on his head. Vodar then freezes the man and brings him to the person who set the bounty on the mans head. Vodar was then given 1,000 Units.

Weather Manipulation:User can control all forms of Weather.

God Blast:User is capable of channeling different amounts of his godly energies in combination with the mystical properties of Soul's Eye can be channeled through his hammer for a single massive blast known as the God Blast.

Anti-Force:User is capable of producing an indescribably powerful blast known as the Anti-Force which is capable of annihilating entire planets. This blast is so powerful that with just a single emission, Vodar was capable of blowing up an entire fleet of spaceships.

Barriers:User is capable of creating powerful barriers, force fields and vortexes that are impenetrable.

Energy Sensing:User can detect practically all types of energy.

Energy Absorption and Redirection:User is able to absorb any energy blasts directed towards him as means of attack. Once the energy is absorbed, user can redirect it back amplified many times over towards the source and/or use it as a weapon of his own.

Teleportation:User can open Portals to anywhere they have previously been. By gripping onto the handle and saying. "Gate!!!". While thinking of the location they want to go to.

Matter Manipulation:User can transmute matter and control matter at a molecular level.

Resurrection:User can bring anyone back to life.

Negation of Mystic Energy:User is able to stop the Juggernaut, Mephisto, Etc.

Recall:User can recall Soul's Eye back to there hand with Irresistible Force.

Interdimensional Messaging:User can send psychic messages between the nine realms.

Chronokinesis:User can bend space and time and allow itself and its holder to travel through time.

All Speak:User can communicate with and be understood by all races.

Flight:User can fly at insane speeds.

Mind Control:The power to control the minds of others.

Size Manipulation:The power to manipulate the size of target.

Illusion Awareness:The power to be aware if one's surroundings are false.

Molecular Immobilization:The power to slow down molecules of object/organism so they are motionless.

Soul Stone:User can use any properties of the Soul Stone to their advantage.