Start a Wiki
"Sons of Zeus" is the twenty-fourth episode of Assemble!'s Season Five and the one hundred and twenty-seventh episode overall.

Thor Odinson travelled to the world of Nidavellir, one of the Nine Realms, which is inhabited by Dwarves. Getting inside a cavern, he walked past the large forgers utilizing the flames and heat from beneath the surface.

-O King Eitri of Nidavellir!- Thor exclaimed as he faced the master blacksmith and king of the Dwarves. -I am coming to you in great sorrow!-

-What is both'ring thee, O Son of Odin, Prince of Asgard.- Eitri asked, walking towards the God of Thunder.

-It’s Mjolnir, King of Dwarves. It stopped responding to me.-

-How can yond beest?! Has't thee been did banish, God of Thund’r?-

-I have not, King Eitri. Somehow I stopped being Worthy… And since you and your fellow Dwarves forged Mjolnir…-

-Thee wanteth us to maketh thee a new hamm’r?-

-Not exactly… I wanted to ask for the axe I used to wield before Mjolnir… Jarnbjorn.-

-Oh! Jarnbjorn is one of our most priz'd livings, Thor Odinson! We has't been keeping it in the Furnaces of Nidavellir ev'r since thee did start wielding Mjolnir!-

-I understand if you are not willing to hand over the axe, King Eitri.-

-Thank you very much, King of Dwarves.- Thor bowed down.

Eitri jumped to a rack and picked up Jarnbjorn, before jumping back down and handing it to a bowing Thor.

-I give you the most wondrous of lucks, Thor Odinson!- King Eitri exclaimed, as Thor walked away from the caverns and travelled back to Midgard, more specifically Athens, Greece.

Climbing to the top of Mount Olympus, Thor accessed to the Realm of Olympus, where the mighty Olympians live.

-Hercules!- The God of Thunder yelled.

-What is going on, Asgardian Deity? - Hera asked, walking towards Odinson.

-Ares has joined a team of villains down on Earth… And I wanted to enlist Hercules’ help in defeating him.-

-That is a noble though… And it can be talked about with Zeus. Follow me, Asgardian.- Hera looked at the God of Thunder, who followed her to the Hall of Zeus.

-Asgardian! I am terribly sorry about your father’s death!- Zeus exclaimed. -During his reign, the Asgardians and Olympians have become closer than ever. Hopefully, the new Queen of Asgard will continue to work on this allegiance.-

-O Jupiter!- Thor looked up at the supreme monarch of the Olympian Pantheon. -Your son, Ares, has joined a team of villains and have kidnapped one of my teammates. It would be extremely helpful if Hercules could join me against him, since I find myself stripped from my powers.-

-Son!- Zeus yelled and Hercules walked inside the Hall, holding his mace on his shoulder.

-Your help is needed on Earth… Ares is causing trouble.-

-Hercules.- Thor nodded. -I need to find a teammate of mine who was kidnapped by your brother.-

-And you need my help. Absolutely!- Hercules put his hands on his waist, chuckling.

-We better get going.- Thor looked at Zeus and Hera. -Thank you for your help.-

The God of Thunder and the Defender of Olympus got back to Earth from Olympus.

-Where are we headed?-

-We are going to try to get Ares to attack us in the last place I ever saw him, the Savage Land.-

-I thought he was causing trouble, not that we were going to look for it.-

-He hasn’t caused a huge trouble for humanity yet but…-

-Hey. I am for it.- The Olympian smirked.

The two gods travelled to the Savage Land, right where the Hulk had been captured.

-Oh, Earth! It’s been awhile since I last came down here!- Picking a mirror from his belt, the Olympian checked himself out on it. -Do you think I look presentable to go to a human club?- Suddenly, something on the mirror caught his attention. -Isn’t that your hammer?- Hercules walked to the Mjolnir, trying to pick it up.

-I see you’re visibly affected by this teammate of yours…- The Olympian folded his arms over his chest. -Tell me, did you feel worthy before you failed to pick it up?-

-I… I guess I didn’t…- The Asgardian looked down at his hammer briefly.

-I need to go, Skull.- Ares looked at the surveillance cameras in the Dark Avengers lair, where he could see his half-brother talking to Thor.

-I already told you not to, God of War.- The Iron Skull muttered bitterly.

Standing up, Ares walked away from the leader. -And I already decided I’m going anyway.-

A flying vehicle appeared above the Olympian and the Asgardian.

-I guess they fell for it.- Hercules chuckled.

Ares got off the vehicle, ready to face his brother.

-It’s been awhile, brother!- The Lion of Olympus exclaimed, putting his fists on his waist.

-Where is the Hulk?!- Thor yelled.

-Oh, shut up, Asgardian! Your friend is being taken care of back in the base!-

-You asked for this!- Thor grabbed his axe and ran towards Ares, as their weapons clashed against each other’s. Hercules followed Thor and hit his half-brother’s chin, destabilizing him. The Prince of Power grabbed a boulder and tossed it at the God of War, as the two heroes gained the upper hand against the Dark Avenger.

Holding Jarnbjorn against Ares’ neck, Thor held the Olympian down. -Where is your base?-

-As if I would tell you, Asgardian. If there is something I know of, that is war!-

Thor clenched his fist and punched Hercules’ half-brother, ready to knock him out. However, he saw the flying vehicle the Dark Avenger had used. Looking at his Olympian partner, Odinson yelled. -Get on the vehicle! Now!-

Hercules ran towards the vehicle, getting inside it. Knowing he had a couple seconds before Ares could react, Thor let go of the God of War and flew towards the vessel as fast as he could. The Dark Avenger grabbed his axe and hit the God of Thunder’s calf, creating a deep wound, but the Asgardian was able to get to the vehicle. Barely able to walk, Thor struggled for awhile before he could set up the controllers in order to get it back to the Avengers Mansion. Ares didn’t wait at all before attacking the vehicle with his machine gun.

-I got it!- Thor introduced the address in the control panel and the vessel started its journey to New York. Unable to stand any longer, Thor fell to his knees and looked up at his partner. -I am pretty sure Stark will be able to figure out the flight routes this vehicle has made and trace them back to the Dark Avengers base. I hope you didn’t have anything to do back in Olympus, because we’re headed to New York.-

"What is going on, Asgardian Deity?"

"Do you think I look presentable to go to a human club?"

"I see you’re visibly affected by this teammate of yours…"

"I guess they fell for it." 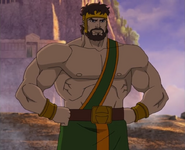 "You asked for this!"

Hercules about to punch Ares

Rock of Ages
Add a photo to this gallery

Retrieved from "https://marvelcomicsfanon.fandom.com/wiki/Sons_of_Zeus_(A!)?oldid=146572"
Community content is available under CC-BY-SA unless otherwise noted.