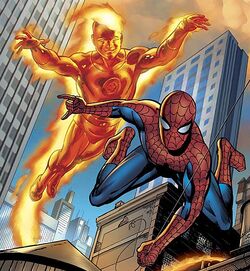 When Yuri Watanabe found out that her friends, Johnny Storm and Mary Jane Watson, had developed superpowers, she revealed her status as the vigilante Wraith and convinced them to join in her crusade. While initially failing, they recruited the Masked Marvel, who changed his name to Spider-Man after joining.

During an attempted defusing of a turf battle between Blue Krüe and the Chain Gang, one of the Chain's suffered a fatal heart attack. Wraith analyzed the corpse and found that he had died from drug overdose. Roberto "The Hellcharger" Reyes, leader of the Chain Gang, noted that green blood was the signature of the streetdrug "OZ." Following a hunch, Peter went to Oscorp Tower and found Oscorp CEO Norman Osborn working on OZ. He expressed joy in finally meeting the infamous Masked Marvel and happily told him his motives. Peter learned that Osborn lost his wife to gang-related violence and that selling OZ was the first step to control city crime. He asked Peter to join him, but he refused and promised to take down his criminal empire. Osborn scoffed and walked him out.

Spidey told his team what happened, but they were skeptical due to his lack of proof. Determined, he started publicly outing undercover member of the Goblin Nation. Osborn got paranoid and sent attack goblins after the Slingers. During one of their fights with the goblins, one goblin, Phil Urich, defected. Urich set up a meeting with his uncle, Ben Urich, the reporter. Wraith had created an antidote and began giving it to Oz junkies. They even convinced Reyes to advocate common folk taking a stand against Osborn.

With his power slowly crumbling, Osborn attacked New York with OZ powered soldiers hoping to stamp out those resisting his power. The Goblin, as he called himself, broadcasted a podcast demanding the city to surrender to him. Wraith figured out that he was broadcasting from Osborn Laboratories and the four heroes went after him. When they confronted him, Osborn injected himself with "OZ 2.0," which transformed him into a grotesque monster. Their battle spread out into the streets and The Goblin seemed to gain the upperhand; however, this was just a diversion so that Wraith could give him the anecdote and Jackpot and Spider-Man could take him out. Torch wanted to make a statement to the onlooking news helicopters, but was remained that the city was still in trouble and they left Osborn for the police.

Retrieved from "https://marvelcomicsfanon.fandom.com/wiki/Slingers_(Earth-774237)?oldid=186030"
Community content is available under CC-BY-SA unless otherwise noted.