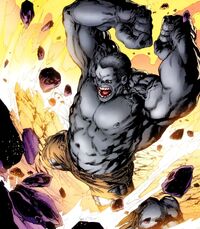 Before the devastating events that wiped all life on Sakaar. Caiera, Skaar's mother was currently pregnant with him at the time. 8 months into the pregnancy, Hulk's shuttle exploded killing all life on Sakaar including Caiera and presumably Hulk. Hope for unborn Skaar was lost although after Caiera's death a cocoon containing Skaar fell into the Lake of Fire.

Two years later, Skaar emerged from the cocoon with the appearance of an 8-year-old boy. Skaar already had the intelligence of an Earth scientist, capable of matching Tony Stark, Reed Richards and their children, Skaar gained this intelligence through his father Bruce. He then gave himself the name Skaar, Skaar then saw that Sakaar was a wasteland and there was nothing left for him, so Skaar dreamed of travelling to Earth. Skaar then used his enhanced intelligence to spend the next 11-years rebuilding his father's shuttle out of scraps from the former prime Sakaar. After Skaar had rebuilt the ship 11-years had passed and Skaar now had the appearance of a man in his late teens or early twenties, although he was 11-years-old, Skaar then immediately set a course for Earth.

Skaar's ship crash landed on Earth, Skaar awoke from the wreckage in human form and quickly escaped. He was then captured by S.H.I.E.L.D soldiers, and they took him to the Triskelion for questioning. Nick Fury (now back in power), questioned Skaar on his alien heritage, Skaar claimed he was the son of Hulk (not knowing Hulk's real name was Bruce Banner), and was born on the planet Sakaar and the reason he came to Earth was because his planet was a wasteland and "extinct", he also claimed he wanted to become a superhero like his father. Fury agreed with this and claimed he needed a new identity and "Earth name", Fury then told Skaar of his father's real name and the two both agreed on the alias "Dorian Banner".

First transformation and joining the Ultras

A month after coming to Earth, Dorian was withdrawing money from the bank, but suddenly the bank was being robbed. Everyone including Dorian was tied up and blinded, Dorian insulted one of the thugs and was then hit in the head with a gun, Dorian was enraged and suddenly underwent a transformation resembling a lot of his father but grey. Dorian had lost all of his memories and the creature dubbed itself "Ira", Ira was enraged and went to stop the robbery. Ira displayed many abilities similar to his father and destroyed two of the cars and before destroying the final car, Ira used a quote from his infamous father "IRA SMASH!!!", after stopping the heist, Ira leapt away. Dorian then awoke reverted back to his old self, Dorian was later found by S.H.I.E.L.D and they confirmed to him that he genetically inherited a "trait" from his father. Fury saw that Ira had displayed "some" heroic actions and asked if Dorian would join the Ultras since their last Hulk-oriented member left the group, Dorian agreed.

A few months later, while at his new apartment, Dorian saw on the news that a green monster was rampaging through New York and had defeated the Ultras. Dorian knew that it was his father, Dorian used his new device given to him by S.H.I.E.L.D to help him transform into Ira without the need to get angry. Dorian transformed into Ira and went to battle the Hulk. Ira quickly arrived at the scene and battled the Hulk, the two battled for hours although the two proved to be an even match, the two defeated each other and reverted to their human forms. Hulk now as Bruce lost balance and dropped to the floor exhausted, Bruce asked who Dorian was and Dorian replied "I am Skaar...your son...", before his father could reply, the latter passed out from exhaustion. Later on, Dorian was contacted and was informed that Bruce wanted to talk to him. Dorian arrived at the Triskelion, Bruce asked if what he told him was true, Dorian confirmed this and Bruce then claimed they had a lot of catching up to do.

Class 100+; Skaar naturally shares his father's great strength, in addition to the Old Power, which bolsters his strength even further. Hence Skaar's strength enables him to potentially lift far in excess of 100 tons. However Skaar's strength at a base level is enough to allow him to lift 90 tons

Retrieved from "https://marvelcomicsfanon.fandom.com/wiki/Skaar_(Earth-1315)?oldid=223298"
Community content is available under CC-BY-SA unless otherwise noted.