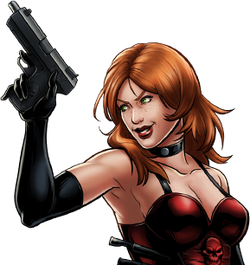 First appearance
A Sin to Err

Sinthea "Sin" Schmidt is the daughter of the Red Skull. Seeking a male heir, the Red Skull fathered a daughter with a washerwoman. The woman died in childbirth, and the Red Skull almost killed the child, angry that it was a girl and not the boy he expected. One of his followers, Susan Scarbo, convinced him not to, telling him she would raise the girl herself as her nanny. The Skull agreed and left the girl (now named Sinthea) to be raised by Scarbo, who indoctrinated her with the Skull's views as she grew up. The Skull returned when Sinthea was a child and put her in a special machine that accelerated her aging process until she was an adult, getting her in HYDRA.

Same as that of a normal human female.

Retrieved from "https://marvelcomicsfanon.fandom.com/wiki/Sinthea_Schmidt_(Earth-1010)?oldid=150215"
Community content is available under CC-BY-SA unless otherwise noted.