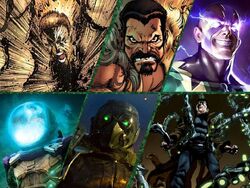 After suffering three defeats at the hands of Spider-Man, Norman Osborn and Doctor Octopus had made an agreement on each other after realizing that they needed help against the web-slinger. He got in touch with every super-powered villain who had battled the wall-crawler. In the end, five other super-criminals heeded Ock and Norman's call---the Vulture, Electro, Kraven the Hunter, and the Sandman, and even had several reserve recruits very much later, including the Rhino, Mysterio, Mysterio (Klum), Vulture (Drago), Shocker, and even forced the Lizard one time.

However, Doctor Octopus recognized that he would never be able to control these super-villains. They were incapable of working together or functioning as a well-oiled machine. Instead of trying to change this unruly bunch, Doctor Octopus conceived a battle plan that exploited their individual appetites for personal glory. Each member of the Sinister Six would stage a separate battle with Spider-Man at a carefully chosen location. One by one the criminals would fight him until the wall-crawler was finally destroyed. Due to obvious reasons, the group's strategy and plans to attack against Spider-Man was changed, and is now often teaming up on each other in order to take down Spider-Man, unless if it's really necessary to split up during their conflicts.

They dubbed this infamous alliance as the Sinister Seven, but was later changed to Sinister Six after the apparent death of Norman during the events of Ultimate War and hasn't currently changed it even during Norman's return, since he didn't rejoin the team, leaving the leading of the group in the hands of Octavius.

Retrieved from "https://marvelcomicsfanon.fandom.com/wiki/Sinister_Six_(Earth-61615)?oldid=184717"
Community content is available under CC-BY-SA unless otherwise noted.