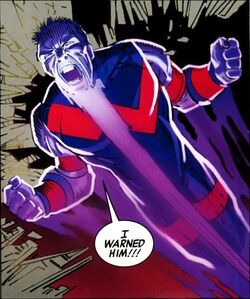 Single
Origin
Origin
After learning that Wanda's recreation of him was turning him into a mindless ion bomb, he joined the Secret Avengers to vent.
Creators

This world hasn't seen violence yet. Not like what's coming. Because son I'll possess nothing but my ions and my rage...and God help the world.

Wraith's history is exactly the same as that of Earth-616's Simon Williams up until the Marvel NEW! relaunch.

Wonder Man began losing control of his powers at inopportune times, forcing him to leave the Avengers. He discovered his superpowers were malfunctioning due to the nature of his resurrection: Wanda Maximoff. Since he was resurrected not long after House of M, he was meant to become an ionic man without emotions: a strange form of the Vision to destroy the Avengers once more. Feeling doomed, he took the codename of Wraith and signed on with the Secret Avengers.

Ionic Physiology: Williams' powers match those of his 616 counterpart exactly, including:

Simon is a skilled actor, combatant, and stuntman.

Retrieved from "https://marvelcomicsfanon.fandom.com/wiki/Simon_Williams_(Marvel_NEW!)?oldid=84244"
Community content is available under CC-BY-SA unless otherwise noted.