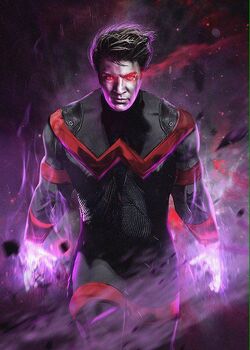 I don't like to be reminded of the things I've done... but I know I don't deserve to forget them.

Simon Williams was a struggling actor who was recruited by Potts International after he tested positive for Inhuman DNA. After going through Terrigenesis, Simon emerged with the ability to alter his entire molecular structure into ionic energy.

He was placed on the Squadron Supreme and dubbed "Ion", where he was ordered to fulfill the dark missions Potts didn't want out in public. However, being forced to do these terrible things drove Simon into a deep depression, and he faked his own death to escape from Potts.

After escaping, Simon tracked down his former teammates Bruce Banner and Stephen Strahan in Genosha, where they helped him out of his depression and to set up a new life in Genosha, where he became a bartender and has considered taking up acting again. However, he is hesitant about putting himself in the spotlight, out of fear that Potts will find him.

Retrieved from "https://marvelcomicsfanon.fandom.com/wiki/Simon_Williams_(Earth-1515)?oldid=245085"
Community content is available under CC-BY-SA unless otherwise noted.