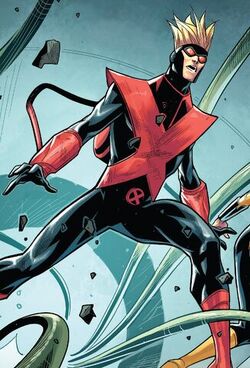 It doesn't matter what they build. We will be there to burn it down.

After his mother died of cancer, Simon Lasker realized he could no longer live a lie, and came out to his father as gay. He was instantly disowned and kicked out of the house, leaving him to fend for himself on the streets. It was on the streets where he discovered his ability to manipulate fire, as well as the limitation of not being able to create it.

He eventually found himself being welcomed into a traveling circus, where he met a man named John St. Allerdyce, who had the same mutant abilities as Simon. He went by the stage name of Pyro, and took Simon under his wing to teach him how to control his powers.

Things took a turn for the worse when anti-mutant protestors discovered that several of the circus performers were, in fact, mutants. In the ensuing riot, John was killed and Simon was barely able to escape with his life. With his newfound disdain for humanity, he ended up being recruited by Magneto to join the Brotherhood of Mutants.

He adopted the name Pyro to honor his fallen friend, John, and has since become a dedicated member of the Brotherhood, fighting for mutant supremacy.

Retrieved from "https://marvelcomicsfanon.fandom.com/wiki/Simon_Lasker_(Earth-101)?oldid=249611"
Community content is available under CC-BY-SA unless otherwise noted.