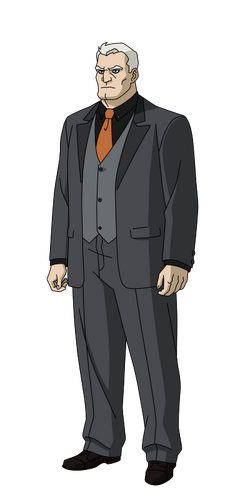 Silvio Manfredi was born in Italy but, as a child, his family emigrated to the United States. The Manfredis settled in Little Italy, Manhattan.

As a teenager, Silvio Manfredi joined a criminal organization known as the Maggia. With his his cunning and superior fighting skills, Manfredi rose in to the top of the Maggia's ranks. Manfredi later became the head of a "family" (a group of people belonging to Maggia and related to Manfredi not by blood or marriage, but by loyalty). By creating gang wars, he increased the power of the Manfredi family. In the process, he also increased the power of Maggia as a whole, which pleased Manfredi's superiors.

Manfredi also married a woman named Catherine during a trip to Symkaria and fathered a daughter, Silver.

Due to a tax evasion, Manfredi was sent to prison, where he remained for a long time. During his sentence, the power of the Manfredi family was greatly diminished and Manfredi's rivals gained control over his territory. One crime lord in particular, named Kingpin, took the majority of Manfredi's power. Manfredi came to consider Kingpin his own personal enemy, although Kingpin never saw Manfredi as a true threat.

When Manfredi finally got out of jail, he met and allied with a younger maggioso, racketeer Dominic Tyrone, who became Manfredi's right hand man. Together, Tyrone and Manfredi violently regained control over the Manfredi family and turned it into the largest criminal organization on the east coast.

Twenty years later, Manfredi decided that Tyrone had served his his purpose. Manfredi hired thug to assassinate Tyrone. The thug came from an alley and damaged Tyrone's spine with a blackjack blow at the base of his skull, then dumped him into a lake to die. However, Tyrone would survive, and will try to get his revenge.

When he was middle-aged, Manfredi's hair became white, which led to the nickname he came to accept: "Silvermane."

After years of successfully running his crime family, Silvermane realized that he had grown old. Fearing for his life, he began to look for a means to recover his youth.

He heard of an ancient tablet that held the key to create a mystic youth serum. Silvermane found the tablet and then kidnapped Dr. Curt Connors. By threatening Connor's family, Silvermane manipulated him into prepare the serum. Silvermane drank the serum but it had the unintended side-effect of de-aging him to non-existence. Silvermane then mystically aged until he was thirty nine.

Silvermane is an accomplished businessman and criminal strategist. And, though these abilities have waned some over the years, he has proven himself to be an excellent marksman and a competent hand to hand combatant.

Retrieved from "https://marvelcomicsfanon.fandom.com/wiki/Silvio_Manfredi_(Earth-1010)?oldid=185109"
Community content is available under CC-BY-SA unless otherwise noted.