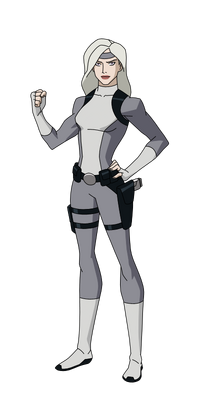 Silver Sable is an extraordinary hand-to-hand combatant and martial artist, an expert marksman and swordsman, an accomplished gymnast, and an accomplished leader and strategist; she is remarkably agile and has exceptional strength, speed, durability, and reflexes.

Indomitable Will: Silver Sable has an indomitable will. She has easily defied a telepath's attempt alter her mind by sheer force of will.

Retrieved from "https://marvelcomicsfanon.fandom.com/wiki/Silver_Manfredi_(Earth-1010)?oldid=192620"
Community content is available under CC-BY-SA unless otherwise noted.