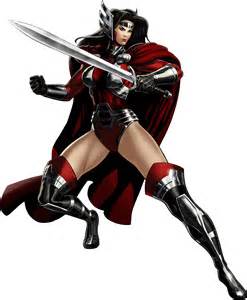 Little is known about Sif's life before the Masters of Evil's attack on Asgard. It can be assumed to be similar to his mainstream counterpart.

Sif and Hermod were among the few Asgardian warriors remaining after the invasion of Asgard, and aided the Ultimate Alliance in their fight against the Masters of Evil.

Equipment: None known.
Transportation: None known.
Weapons: Sif wields a special sword enchanted by Odin to enable her to cleave passageways between dimensions, primarily between Asgard and Earth, by a special pattern of swinging motions.

Retrieved from "https://marvelcomicsfanon.fandom.com/wiki/Sif_(Earth-6109.2)?oldid=223428"
Community content is available under CC-BY-SA unless otherwise noted.