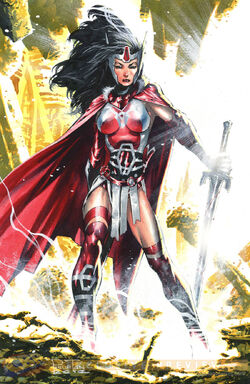 We all know who the greatest warrior in Asgard is.

Lady Sif never wanted to be a Valkyrie, nor did she want to be royalty. She just wanted to stand alongside her fellow warriors and protect the homeland she loved so much. Her icy attitude led to many of the male warriors keeping their distance, but not the Warriors Three.

Sif became enamored with the brashness and compassion of them, becoming close friends with each of them, Hogun, Fandral, and Volstagg. They eventually introduced her to Thor. Sif and Thor quickly became attracted to each other, and maintained an on and off relationship.

Sif was bitter when Thor was banished to Midgard and fell in love with the mortal Jane Foster, but did not let that stop her from assisting him in the battle against Loki. While Thor decided to remain on Midgard, Sif found herself joining Balder in venturing the Nine Realms and beyond.

Due to this position, Sif and Balder were not readily available when the Serpent began wreaking havoc on Asgard and the Nine Realms. They were, however, more than happy to help Thor in the aftermath as he rebuilt Asgard on Earth. While Balder decided to continue maintaining relations between the Nine Realms, Sif opted to remain with the Royal Family and help to make sure the establishment of New Asgard went smoothly.

[[Category: In a Relationship with Balder Odinson Characters]]
Retrieved from "https://marvelcomicsfanon.fandom.com/wiki/Sif_(Earth-101)?oldid=250233"
Community content is available under CC-BY-SA unless otherwise noted.