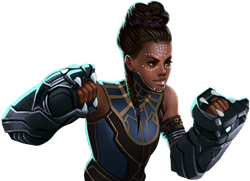 Shuri has the same origin as her Earth-199999 counterpart.

Shuri joined her brother, T'Challa, in an attempt to fend off Namor's attack under the influence of the Phoenix Five. She was curious about the nature of his radically upgraded powers and showed interest when Storm offered to teach her about the entity.[1]

Retrieved from "https://marvelcomicsfanon.fandom.com/wiki/Shuri_(Earth-1010)?oldid=204699"
Community content is available under CC-BY-SA unless otherwise noted.